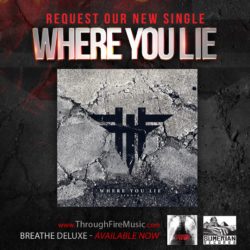 Where You Lie is Through Fire’s third single off their debut album, Breathe. The song’s lyrics are about the narrator being disappointed about their significant other because they did something wrong, basically telling them to get out of their life. The narrator is saying to never come back, using “keeping digging your grave” as a metaphor as the more they want to come back to the narrator, it just keeps on getting worse and worse, as the narrator is fine without them. Music wise, it has a very catchy chorus to the sound, putting emphasis on the word “lie”. It has a heavy bridge to the song, with a very shreddy guitar solo from Justin McCain.

I would highly encourage to call your local active rock radio station and request this song, as this will help you get through your morning commute, work day, and/or rush hour. Check out Breathe, as well, and Through Fire on tour in a city near you because these guys do not disappoint.

[Where You Lie – Through Fire by Sumerian Records]

Hard rockers Like A Storm and Through Fire have just announced their U.S. co-headline Firestorm Tour 2019. The tour starts on July 12th in Neillsville, WI and wraps in August 10th in Lincoln, NE and […]

“Fire From The Gods” Video Review of “The Voiceless”

Fire From The Gods have released their video for “The Voiceless” off their upcoming album “Narrative Retold” produced by Jonathan Davis (Korn)  which is set to drop May 19th on the RISE label.  AJ Channer […]

Yesterday, Friday, April 23rd, Council Bluffs’ radio station 89.7 The River has announced that River Riot, scheduled for this June 5th, 2021, at Westfair Amphitheater in Council Bluffs, Iowa has been rescheduled to Saturday, August 14, 2021, and has […]