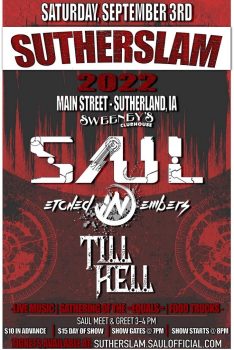 Sutherslam 2022 was more than a concert, it was a gathering of family, friends, and fans (affectionately known as Equals).  The show Saturday, September 3rd in Sutherland, Iowa was Saul’s third event. Sutherslam was originally a benefit for Blake (vocals) and Zach (guitar) Bedsaul’s mother, who in 2019 had been living with cancer. Bedsaul’s mother has since passed, but they continue to hold the event in their hometown of Sutherland as a celebration of life.

Sutherland, population 530, doubled in size. Sutherslam held downtown on Main Street was a small, relaxed, intimate event that included food trucks, food truck cooking competition, a corn hole tournament, raffle and meet and greet. People came from across the Midwest.  For Equals, it was like a family reunion. For some, the last time they’d seen each other was at Sutherslam 2020. Saul skipped putting the event in 2021 due to family events; Blake Bedsaul and William McIlravy (Bassist) had babies around this time last year.

Till Hell (Lincoln, Nebraska) and Etched In Embers (Lake of the Ozarks, Missouri) opened the show. Saul performed their Rise as Equals album in it’s entirely. Many of the songs had never been performed live. Regardless of the intimate size, there was big energy.

BY DEAN BIRKHEIMER | Go Venue Magazine “Rock ‘n’ roll might not solve your problems, but it does let you dance all over them.” – Pete Townsend On September 2nd 2022, Stir Cove and Foreigner took us all back to […]

BY JOE DeSANTI | Go Venue Magazine On Friday night, August 30th, two of my favorite rock bands from the 1990’s invaded the Stir Cove in Council Bluffs, Iowa, and I couldn’t have asked for more. Concertgoers […]