America will see an Ozzfest date in 2018! To close out the year, Ozzy Osbourne will headline in California with support from Rob Zombie, Marilyn Manson, Jonathan Davis, Body Count and more. 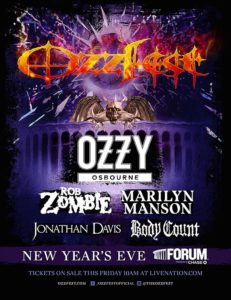 Hate the holidays? So does Ozzy Osbourne. According to Sharon Osbourne, Ozzy was dying to perform. “He hates Christmas and he hates New Year’s Eve. He always saying, ‘Let’s do a gig.’ And I’m always like, ‘There never is one.’ So this year, we said, ‘All right, let’s do an Ozzfest, because we never did it this year,’” Sharon tells Rolling Stone. “Everybody used to play on New Year’s and Christmas in the Seventies and Eighties, but not anymore. So it’s the perfect time.”

Even with Ozzy Osbourne undergoing multiple surgeries to fix a staph infection in his finger, causing four gigs to be postponed, Ozzy is dedicated to performing on New Year’s Eve.

Set for Monday, December 31 at The Forum in Los Angeles, OZZFEST will kick off with live music at 2:30 PM with sets from Zakk Sabbath, Devildriver and Wednesday 13 on the outdoor stage.  Early concert-goers will also get to sip cocktails while also enjoying offerings from a variety of food trucks which will be set-up throughout the outdoor performance area, all available for purchase.  Food choices include Mess Hall Canteen, Burger Monster, The Viking Truck, The Coconut Truck, Kala Truck, Broken Rice and Drizzle Truck, plus a booth from the legendary Trejo’s Tacos.

At 6:00 PM, everything shifts indoors at The Forum where OZZFEST alumni Rob Zombie, Marilyn Manson, and Jonathan Davis (of Korn) and Body Count featuring Ice-T (in their OZZFEST debut) will take the stage.  The night will conclude with a performance from festival namesake Ozzy Osbourne, who will count down to the new year!

Tickets for the Live Nation-produced OZZFEST 2018 are on sale now here.  Ticket prices range from $49.50 for general admission to $179.50 for a reserved seat.

The OZZFEST line-up is as follows:

Tickets for the show still on sale via Ticketmaster, with VIP packages available at Ozzfest.com. You can also grab them here.

BY MAURICE NUNEZ | Go venue Magazine Tonight was the LA premiere of Brutal Realty, Inc. I had been waiting for this film to hit Los Angeles as so far this short film has played a few […]

LIVE REVIEW: Dark Funeral at SOLD OUT Show in Los Angeles on June 15, 2019

BY MAURICE NUNEZ | Go Venue Magazine Tonight the Devastation On The Nation North American Tour 2019 made it’s way to Los Angeles. In fact, this show was Sold Out before the tour even started. […]