Richmond, Virginia’s MUNICIPAL WASTE are jumping on the road with UK grindcore band NAPALM DEATH for a co-headlining US Tour! The 17-date trek will kick-off in Dallas on October 3rd and visit New York, Chicago and Denver before ending on October 23rd in Los Angeles. Opening the night are New York hardcore legends SICK OF IT ALL and hardcore punk/thrash metal band TAKE OFFENSE.

MUNICIPAL WASTE’s Tony Foresta comments, “Ohhh, I’m exhausted. I’ve been on this street a thousand times. It’s never looked so strange. The faces…so cold. In the distance, a child is crying. Fatherless…a bastard child, perhaps. My back aches…my heart aches…but my feet (stops to look at feet)…my feet are resilient! Thank God I took off my heels, and put on my… HIMALAYAN WALKING SHOES! Also this tour is going to rule. Yes! “

Equipped with a crushing sound that will implode both your soul and skull, speed metal masters and Richmond Virginia locals MUNICIPAL WASTE barrel back onto the scene with their latest piece of toxic detritus Slime And Punishment! Their long awaited return has breathed a new life into this modern speed metal crossover project that was initially birthed in 2000. Being their sixth release, and their second on Nuclear Blast Records, it is no surprise the level of artistic freedom and creativity that was seamlessly pushed into this album.

Purchase your copy of Slime And Punishment HERE. 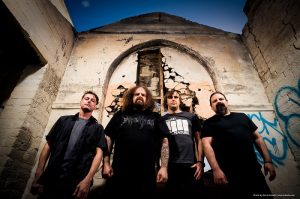 NAPALM DEATH’s enduring impact on the world of sonic savagery began in earnest in the late 80s, when the band’s first two albums – Scum (1987) and From Enslavement To Obliteration (1988)– refined and redefined the notion of brutality and velocity in the worlds of punk, hardcore and metal. Endorsed by legendary and much-missed DJ John Peel, the Brummie grindcore pioneers have released a relentless slew of groundbreaking and fearless albums that have consistently punched holes in the heavy music world’s perimeter fence, espousing an indestructible credo of creativity and lyrical fire along the way. Albums like Smear Campaign (2006), Time Waits For No Slave (2009) and Utilitarian (2012) have proved beyond doubt that while their creators remain firmly at the forefront of the grindcore scene, they are also increasingly capable of expanding the boundaries of their own sound while exhibiting an undying passion for incorporating the most unimaginably intense and perverse fresh elements into their otherwise remorselessly fast and furious blueprint. With the release of their fifteenth and most recent studio album, Apex Predator – Easy Meat, the undisputed Gods of Grind shattered preconceptions and redefined what it means to be truly extreme all over again.

While grind purists may point to those earliest records as evidence of the band’s significance, it is the tireless and terrorising exploits of the now classic line-up of vocalist Mark ‘Barney’ Greenway, bassist Shane Embury, guitarist Mitch Harris and drummer Danny Herrera that have cemented NAPALM DEATH’s status as extreme music legends. Now, the band is currently in working on their forthcoming release and follow up to 2015’s Apex Predator – Easy Meat, which is slated for a 2020 release.

ABOUT SICK OF IT ALL 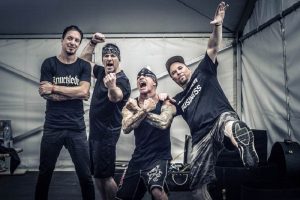 New York City hardcore legends SICK OF IT ALL aren’t slowing down with age, the long-standing quartet are still pissed off, and the genre stalwarts still see many years ahead. SICK OF IT ALL remain a beacon of continuity, integrity, and resolve. That’s good news for SICK OF IT ALL fans and the hardcore scene. Since forming in 1986, SICK OF IT ALL have traveled the world many times over, played in front of hundreds of thousands, and released 11 acclaimed full-length albums, the latest of which is the riotous if anthemic Wake the Sleeping Dragon!. That SICK OF IT ALL continue to live by the standards in their original charter isn’t a matter of course, it’s part of their respective DNA. Hardcore is SICK OF IT ALL. “We’re a band that thrives from frustration,” says drummer Armand Majidi. “Aging seems to work well with our message, as opposed to a good-time band who sings about partying all night. There are so many horrible aspects of the world that become more obvious to us year after year, which we didn’t see or understand before, which fuel our frustration every day. We’ve lived long enough now to see through the matrix, and thank goodness we have this band, so we can vent about it.” 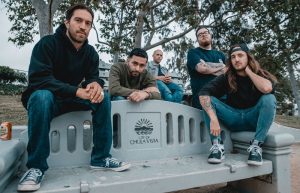 Weathering countless trends and defying all odds, over the past decade Take Offense has established themselves as one of the West Coast’s most prominent hardcore crossover acts. Sonically, Take Offense hits hard, with a sound steeped in late 80’s NYHC tradition, coupled with the distinctively Venice crossover stylings of SUICIDAL TENDENCIES and the like.

TAKE OFFENSE manages to both wet the palate of the stodgy old guard, while satisfying the youths’ insatiable lust for hard hitting, mosh riffage. Established in 2005, Take Offense have never been ones to rest on their laurels, and after a handful of EPs, 2011’s landmark full length Tables Will Turn, and a hell of a lot of time on the road with stalwarts such as Terror, Agnostic Front, D.R.I., Trapped Under Ice, Backtrack, Alpha & Omega, and Rotting Out, the band are set to unleash their latest magnum opus, United States of Mind, on the mighty Reaper Records.

Though TAKE OFFENSE are at a point in their lifespan when many bands shrug their shoulders and crank out half hearted riffs and reheated lyrics, United States of Mind proves the group has the stamina and creativity to push their sound forward without losing touch with their roots. In short, TAKE OFFENSE are one of the most engaging hardcore bands to emerge in recent years, and lucky for all of us, they don’t appear to be going anywhere.

All that’s left is to accept your fate and enter: THE T.O. ZONE

Napalm Death and Decibel Magazine Team Up For Vinyl Re-Issues of ‘Time Waits For No Slave’, ‘Smear Campaign’, ‘Utilitarian’, and ‘Apex Predator’

UK Grindcore pioneers NAPALM DEATH have just launched the pre-orders for their limited edition vinyl re-issues of Time Waits For No Slave, Smear Campaign, Utilitarian, and Apex Predator. There will only be 1000 copies available of each title in exclusive custom […]