Tattoo the Earth will take place at The Palladium Outdoors on Saturday, August 27.

The second wave of performers has been announced and includes Bleeding Through, Crowbar, Overcast, Spirit Adrift, Terror, The Red Chord (marking their first local appearance in seven years), and Within The Ruins.

The eclectic and diverse lineup is nothing short of epic and offers something for all metal fans.

Tattoo the Earth will feature two stages of live music, a tattoo village hosted by Zaza Ink — one of the leading tattoo shops in Massachusetts — and a festival village, which will include piercing, body painting, art events, contests, and more. Food trucks and a Bacon & Bourbon tent will also be on site.

Those include a VIP upgrade of:
*Meet and Greets with select artists
*VIP Area Access
*Festival T-Shirt
*Souvenir Laminate + Lanyard
*Festival Poster
*Signed copy of Caravan of Pain: The True Story of the Tattoo the Earth Tour by festival founder Scott Alderman
*Raffle for sidestage viewing for band of choice

The full lineup of performers and on-site activities ensure that Tattoo the Earth is an event NOT to be missed.

But then again, Tattoo the Earth has always been a “must see.”

The original tour (featuring Slayer, Slipknot, Mudvayne, Coal Chamber, Sevendust, Hatebreed, and Sepultura, among others) had quite the history.

It ran through the summer of 2000 and was somewhere between a kick-in-the-balls to the establishment — both society and the music agency business — and a trainwreck. It stayed on course and played fairgrounds, racetracks, and even Giants Stadium in New Jersey, joining forces with a Metallica gig. The Massachusetts play at Suffolks Downs racetrack in Boston was one of the highlights, both musically and attendance-wise, with over 12,000 tickets sold. Even though tattooing was ironically illegal in Massachusetts, the show happened, but was subsequently “banned from Boston for life,” due to neighborhood complaints of foul language.

Over 20 years later, tattooing has long since been legalized in the state, and both that and metal are firmly embedded in popular culture.

Tattoo the Earth 2022 will play one show only at The Palladium Outdoors in Worcester on Saturday, August 27.

The Tin Bridge Brewing Co. from Westfield will be doing a craft beer for the festival. It will be a New England-style Pale Ale. Tin Bridge will also host a pre-show party at the brewery on August 22 as part of their Metal Monday series. 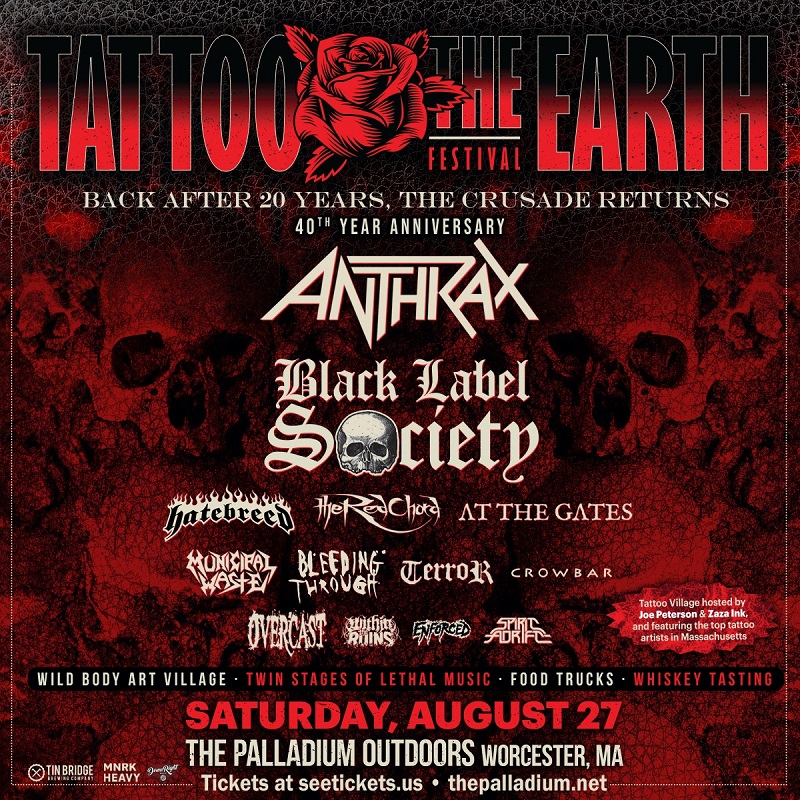 This summer, Anthrax and Black Label Society will bring some of the finest thrash and heavy metal to 24 North American cities when they kick off a five-week tour on Tuesday, July 26 at Van Buren in Phoenix, […]