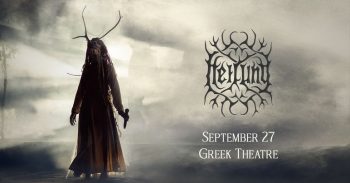 Heilung performed to a sold-out audience at The Greek Theatre in Los Angeles on September 27, 2022. Their first tour in the beginning of 2020 sold out in days, so it makes sense that this tour was brought to larger amphitheaters. Their style of folk music, their fascinating visuals and captivating rituals make their concert a must-see event. An outdoor setting is perfect to enjoy this band. In the beginning, a ritual of smudging, chanting and interpretive dance take place. The words they are reciting are on large screens for the audience to participate. Everyone is standing and reciting along with the band. When everyone isn’t speaking, it’s completely silent except for some light drumming. The fact that they are able to completely silence an amphitheater is incredible. Throughout the show, fans in the crowd were telling others that they were needing this experience and remarking how much better they felt as a person. Some of their songs they performed were “Othan”, “Traust” and “Norupo”. They closed their show with “Hamrer Hippyer” while holding hands and thanking the audience for being with them that evening.

Members of Heilung are from Germany, Norway and Denmark. Their music is based off Germanic texts from the Bronze Age, Iron Age and Viking Age. They even had a song in the movie, The Northman earlier this year. Their third album, Drif, which means “gathering,” was recently released on August 19, 2022. Their performance is so magical and an experience that you won’t forget. Here is their beautiful message that they begin their ritual with that completely captures what they’re about: “Remember, we are all brothers. All people, beasts, tree and stone and wind, we all descend from the one great being that was always there, before people lived and named it, before the first seed sprouted.”

Wednesday 13 Live at The Whisky

BY MAURICE NUNEZ | Go Venue Magazine On Friday, May 6, 2022, the duke of spook, Wednesday 13 and his ghoulish crew made their way to Los Angeles this evening by playing to a ‘Sold […]