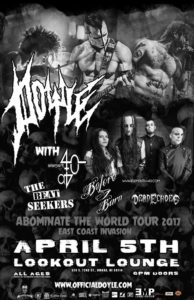 LEGENDARY MISFITS GUITARIST DOYLE with front guy Alex Story, bassist Brandon Strate and Brandon Pertzborn on drums; and the Phoenix-based industrial/metal band Element a440 as tour support act; made their stop of their 2017 East Tour at Lookout Lounge in Omaha, Nebraska on Wednesday, April 5, 2017 in supporting of their upcoming full-album DOYLE II: AS WE DIE which will be available Worldwide on CD and LP May 5th (now push back to June 2nd) from EMP LABEL GROUP and Doyle’s own MONSTERMAN RECORDS (see below to place an order).

I have seen Doyle and his band for the fourth times in concert now.  First two was in Lincoln, Nebraska in March and September of 2015; and in Des Moines, Iowa 10 days later and just now.  I still enjoyed their show very much obviously.

Look forward to seeing them again next time.

If you haven’t seen their show this year, be sure to check out their 2nd leg tour HERE.

And then … hope you enjoy viewing those photos, see below: 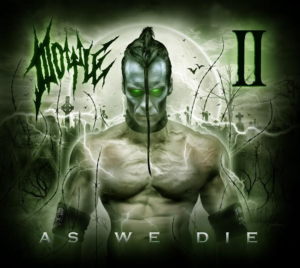 If you haven’t pre-ordered your copy yet, grab it HERE.

Dream Theater Celebrates 20 Years of Metropolis Pt. 2 at the Orpheum

REVIEW BY DAVID TAYLOR AND PHOTOS BY ROBERT A CHADWICK | Go Venue Magazine Mondays are usually just the worst. You go to work after a nice weekend doing whatever, as it begins the long […]

CenturyLink Center was packed for a Friday night concert on July 21. It was a long time coming for Nickelback, having to cancel not once, but twice in the past couple years, having been five […]

BY JOE DeSANTI | Go Venue Magazine  On Tuesday night October 1, 2019, Grammy Award-winning and Vocal Group Hall of Fame artists, the Doobie Brothers, played for a sold-out crowd at the Orpheum Theater in Omaha, […]