“But if you’re going to dine with them cannibals, sooner or later, darling, you’re gonna get eaten…” -Nick Cave- 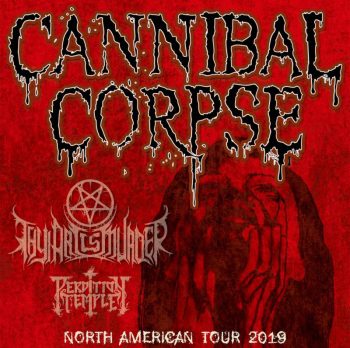 Cannibal Corpse recently came off a stint opening for Slayer on the extreme thrash metals band’s final tour.  After sharing the stage with Slayer, Lamb of God and Amon Amarth for an epic run of dates, Cannibal set out on a 2019, 31 stop tour in support of their 2017 release Red Before Black. Helping them along the way are Thy Art is Murder and Perdition Temple. On November 7th, 2019 it was Omaha’s turn to see this iconic band.

Perdition Temple’s latest album, The Tempter’s Victorious, was released in 2015, but just last year they put out a split EP, Tribute to Blasphemy. Some of you tyrants may remember Angelcorpse. During their time on earth, this band put out some glorious full-length albums, but years ago decided to call it quits. Guitarist and songwriter, Gene Palubicki then formed Perdition Temple. Joining Gene were Alex Blume (bass/vocals) and Ronnie Parmer (drums) and it was this trio that took the stage first. Perdition Temple have amassed tons of followers since Tempter’s Victorious, and these fans were there early as not to miss a single note that was to be performed by this band.  It’s amazing just how fleet fingered Gene is, and not just on one fret. This man is up and down the frets making sure each one gets a touch. This is a no fluff needed band who can get you to do what they want you to with just 2 guitars and a set of drums. Speaking of drums.  I’m not sure you can find a better death metal drummer than Ronnie Parmer, it’s like he’s striking with Thor’s hammers instead of sticks. Check out this amazing video drum cam video of him: Ronnie Parmer Drum Cam.

You don’t normally get this much quality from an opening band and all I could do was ask myself, who the hell is going to top this?

The answer to that question was Thy Art is Murder.  They released their 5th album Human Target to incredible reviews back in July and we were treated to four songs off that release.  Human Target, New Gods, Death Squad Anthem (which kicked off their set) and Make America Hate Again.  Thy Art’s sound is brutal and belligerent, they are unrelenting and bone crunching. Watching this band is like getting stuck on the railroad tracks with a freight train barreling down upon you. You have time to get out, but like a deer in the headlights, you are mesmerized and before you know it, they crash through you and when it’s over, you are left mangled on the floor. This Australian deathcore band hails from Sydney (GO SWANS) and utterly shreds.  Tons of strobe and backlighting make shooting this band extremely difficult, but they shoot back with machine gun fury in the form of metal.  This is the band that set the scene for the savagery that is the pit. The band even took a moment to acknowledge its beauty.  If you were to form an all-star death metal band, you could not go wrong in selecting CJ McMahon as the lead vocal, He is in as good as form as ever. CJ can switch from many different versions of scream, including the bassiest snarls I’ve ever heard. Sean Delander and Andy Marsh on guitars are unrelenting and tireless. Kevin Butlers bass playing is intelligent and is always where it should be. Now officially the new drummer Jesse Beahler formerly of Black Crown creates ripping tempos and expresses wild energy and emotion. This band brings back recollections of old school groups.  An iron bombardment of throaty energy. As they left the stage all I could do was ask myself, who the hell is going to top this?

The answer to that question was Cannibal Corpse. “Three decades of gore” That was what I read on the back of a fan’s shirt. The whole death metal, death core thing, isn’t it supposed to be a young man’s game? Don’t tell that to the Cannibal members: Alex Webster, Paul Mazurkiewicz, Pat O’Brien, Rob Barrett or George “Corpsegringer” Fisher. This band is a battering ram of sound. Fans go rabid for them and mosh pits increase in size and speed when Cannibal is on stage. Best moment was during Kill or Become when the crowd sang-along to the refrain “Fire up the chainsaw. Hack their fxxking heads off!”  Buzz saw sounding guitars and twirling head banging. Fishers about the only one left who can still do the helicopter head banging, other normal men would have suffered brain damage in just one go, much less 30 years of it. The Waiting Room had turned into a complete madhouse, I’ve never seen so much sweat flying in my life.  The mosh pit was about as big as the entire venue and it got worse or better (depending on your perspective) when the bands last song Hammer Smashed Face started.  There is simply no band on this planet that has this type of relationship with its fans. If death metal were a religion (and I assume it is to some) then Cannibal Corpse is their savior.  Cannibal is the biggest band in death metal and their sound is sheer unyielding power. Above all things this band is professional and take great care in respecting their craft and genre of music.

When it was over, all I could do was ask myself, who the hell is going to top this?

The answer is obvious. NOBOBY!!

Thy Art is Murder

BY JESS BECK | Go Venue Magazine This show was kind of a special deal to me – and I know I say that about every show I shoot, but this one was a little […]

REVIEW BY DAVID TAYLOR AND PHOTOS BY ROBERT A CHADWICK | Go Venue Magazine Full disclosure: Since Go Venue has covered two dates [May 25, 2018 and May 17, 2019] on the final tour they […]