Saturday July 1st San Bernardino Glen Helen Amphitheater welcomes Iron Maiden and its 25 thousand followers for the first greatest show of the summer in southern California. It was about 85 degrees that day so we were off to a great start considering that in this part of California we can well pass the 100 degree temperature. Fans arrived as early as noon, they parked in the lot, fired up the grills under their easy ups, drank beer and told stories about how they started listening to Iron Maiden others chatted about what they thought the set list would be for the show. The vibe was chill and I was glad I got to be part of it. 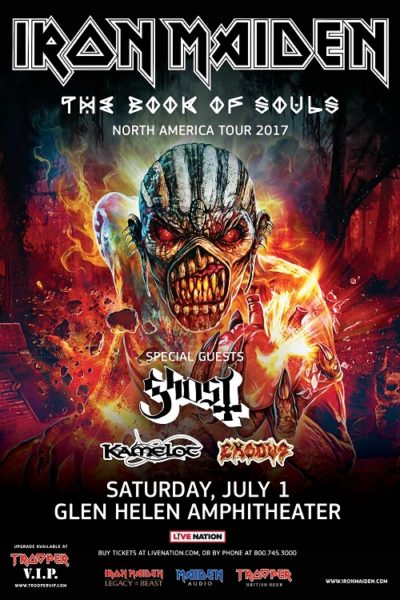 What can one say about Iron Maiden that hasn’t been said before. Iron Maiden the pioneers of the new wave of British heavy metal. Despite little radio or television support, Iron Maiden is considered one of the most successful heavy metal bands in history. Just ask their fans worldwide, with countless sold out shows all over the world. Iron Maiden brings people together from all paths of life, all colors, male or females, all ages, when you’re at an Iron Maiden show “We are all brothers and sisters”-Bruce Dickinson

At around 230 pm I can see fans gathered outside Glen Helen Amphitheater waiting for doors to open at 3 pm maybe a few hundred people while others are still arriving or simply playing beer pong on the back of their parking spot.

Finally inside the venue around 7 pm I grab my bottle of wine and head out to look for my seats, at about 730 pm Ghost hits the stage and sets out a relaxed enjoyable mood with their simpler pop-rock sound. Ghost fans rose to their feet as members of the band “nameless ghouls” start coming out on stage waiting for Papa Emeritus to join them.

As the sun goes down over the mountain that surrounds Glen Helen it get a bit chill and darkness quickly follows, at around 850 pm you can hear faint chants ” Maiden, Maiden, Maiden” they grow louder and louder the jumbo-tron turns on. An animated Eddie (Iron Maiden’s mascot for the past 35 years) is making his way through a cave of what seems to be a Mayan civilization. The jumbo-tron turns off, the stage lights up with fiery torches, the music starts and The Book of Souls tour begins with “If Eternity Should Fail”

The Book of Souls album is inspired by Mayan civilization. During the set Bruce Dickinson says “Were going to the titled track “The Book of souls” lots of stuff going on in this song big speculation about what might of happened to the mighty civilization that was the Mayan civilization they just disappeared one day  and nobody knows why, could it have been an argument about a 3 minute or a 4 minute boiled egg, who knows, I don’t know, it could have been that one of them was at this gig and they were just getting direct contact smoke from all the shit your smoking, that’s a fucken great way to end a civilization right there”

At around 1023 after a phenomenal performance of “Iron Maiden” Bruce Thanks the crowd and says good bye. Fans are standing around clapping yelling, chanting “one more song, one more song” “Maiden, Maiden, Maiden”. The stage lights up once again with green lights and you hear Barry Clayton’s voice “Woe to you, oh earth and sea, for the Devil sends the beast with wrath, because he knows the time is short” at this moment fans rush back to their seats and you can hear the excitement and the energy grows as everyone recites the intro to “The number of the beasts” I can see fire pits growing in the grass area where fans dance and mosh-pit around fire as Iron Maiden takes the stage once again for the final songs.

See video of ‘The Number of the Beast’ below (video by Gloria Skulls):

At 1045 the show is about to end and what a perfect way to end it with the classic “Wasted Years”. At the end of the song Bruce Dickinson says “will be back one of these days to torment you again, what a great night, love ya, have a safe trip home, have an amazing weekend, have a pretty 4th of July, even tho i think the wrong side won but there you go alright, well see you later” Bruce’s humor and interaction with the audience throughout the performance kept the crowd pumped and interested, besides the fact that their musics is timeless, that is why Iron Maiden is one of the music giants that will never die.