Saturday, September 17, marked the return of one of metro Omaha’s favorite bands, I Prevail. This band was headlining Sokol Underground in 2016 and now is headlining one of the metro area’s premier arenas. How could this happen so fast? Well, when you have a band that stays true to themselves and makes relatable music that is enjoyable for young people, you have a great return on investment. And Liberty First Credit Union Arena in Ralston, Nebraska made that happen. 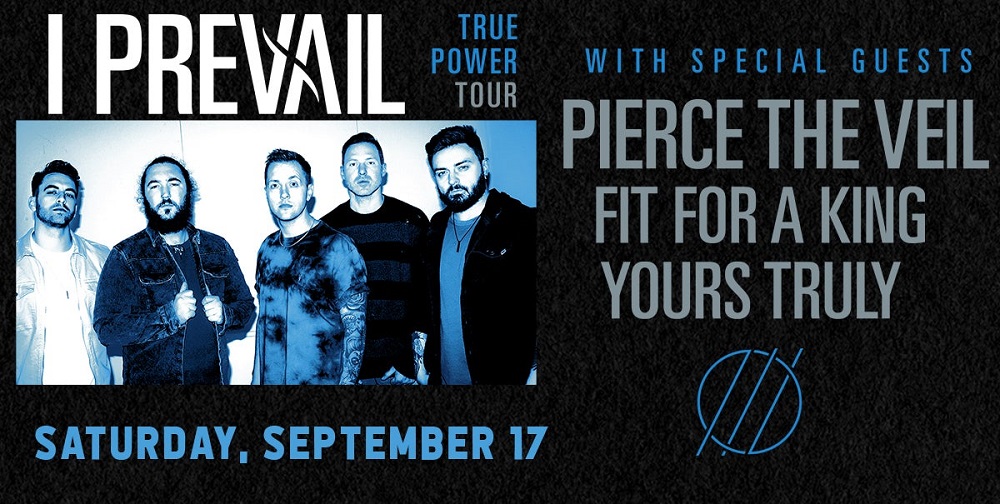 Yours Truly, a pop punk band from Sydney, Australia, was the opener on the bill. This was their second tour in the United States, and what a bill to be a part of. This band would’ve crushed it at Warped Tour if they were still touring annually. I found this band’s material really catchy and just straight-up fun. Lead singer Mikaila Delgado has an incredible voice and loved to move around on stage, with the high kicks to prove it! She also made sure the crowd was doing ok as she noticed something going wrong, which earned my respect. It was a great start to an amazing bill. I’m so happy they are getting more exposure over here in the US. Check out their recently released EP, Is this what I look like?

Fit For A King from Texas took the crowd by storm inside the arena. This metalcore act brought the heavy to the stage. They really got the pit going with their set and initiated the crowd surfers. I was really impressed by bassist Ryan “Tuck” O’Leary swinging the bass around skills. I heard the crowd going crazy for it, as they should. My ear caught how well-blended lead vocalist Ryan Kirby’s clean and unclean vocals were, that very few vocalists can accomplish. He also how bad his mental health was during the pandemic and that he should have always prioritized it earlier. It was very inspirational to hear that. Be sure to check out their latest album coming out next month, The Hell We Create.

Pierce the Veil from San Diego, CA was the direct support for the night. These guys have been coming to Omaha for fifteen years(!), so they have always been loved by the Nebraska folk. The energy on that stage was on fire constantly. For a band that took five years off for behind-the-scenes reasons and the pandemic, they were desperately searching for that live performance feel. And you can definitely see that on stage. It felt fresh and like an up-and-coming band who is hungry. Lead vocalist Vic Fuentes still sounds amazing. Bassist Jaime Preciado was like a madman on stage, just running around the stage, left and right. The audience had a ton of fun, singing along to the songs. I’m so glad Pierce the Veil is back and better than ever. Their latest single, ”Pass the Nirvana”, is streaming everywhere.

Lastly, Michigan’s own I Prevail was ready to tackle the stage. This band continues to perform live with a level of confidence and fun. They know how to get a crowd excited through their music.  They performed eleven(!) songs from their latest release, True Power. It really shows how proud of their work and how much they busted to create their art, especially during a pandemic. The bands on the bill really cared about the safety of the fans, with I Prevail, as well as Pierce the Veil having to pause their respective sets for medical emergencies. I’m so glad they valued safety first. I’ve never seen this arena in Ralston so packed in the handful of concerts I’ve attended. For a relatively still new band, I have nothing but high hopes for this band. Let’s go bigger. CHI Health Center? I definitely think it is possible. I would like more concerts like this at Liberty First Credit Union Arena, please and thank you.

Fit For A King

BY JESS BECK | Go Venue Magazine It’s always interesting shooting shows in new places. See, back in Nebraska you sort of always knew what to expect, who to see at certain shows, etc. Here…it’s like […]

DEAN BIRKHEIMER | Go Venue Magazine  “Ugh. Universe and future, like they’re one and the same…it’s so bright and shiny sci-fi. I’m still waiting on that jet-pack they promised us in the sixties.”  –Doctor Thirteen- […]