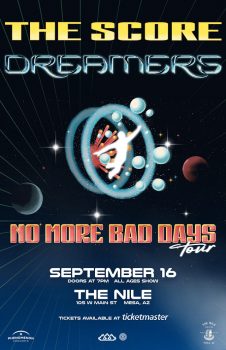 Five acts (yeah, you read that right) converged to deliver quite a spectacle at the Nile Theatre on September 16, 2022 in Mesa, AZ for an all ages show on a Friday night. Admittedly, I wasn’t quite sure what to expect as I’d only ever heard of two of the acts on the bill, but I got the invite and thought, “Fuck it, what’s the worst that could happen?” But I won’t waste time with what could’ve been or what ought to have happened. Let’s just dive right in!

First up to the party was Magic Whatever, a band from California and the brainchild of Trever Stewart. Touring guitarist Josie Randle helped to pump fire through the system, even if Stewart unplugged her a few times. Magic Whatever puts on one hell of a show, though, and Stewart hardly stays still for very long, prancing around the stage like a newborn deer finding its footing. In fact, I think the only time that he stayed still for any period of time was when he ended up on his back for the third song. Not like in a Scott Stapp way where he was just too drunk to stand up, but I think he needed a breather. “We found out about this tour 4 days ago, and I met my drummer at the airport, so I didn’t have time to get in shape for this,” he panted as the audience laughed in response.

They certainly had one of the more enjoyable performances of the evening, and notable tracks included “Chewing on My Tongue,” “Punch Drunk Love,” and “I H8 Everything.” Make sure to give ’em a spin on Spotify or whatever streaming platform you use!

Next up was 7EVIN7INS (seven sins for people who can actually spell things), playing their first tour ever, they mentioned to the audience. Hailing from New Jersey, the vocalist who only goes by 7EVIN7INS, was a little visibly nervous but being the first tour that’s understandable. They rose to prominence after uploading a song to their Instagram account that would eventually go on to get over 2.4 million streams on Spotify. Notable tracks included “Life Gets F**ked Up,” “Oh Shit,” and “Let Go.” But you have to give credit where it’s due – basketball didn’t work out due to injury, and now they’re doing this music thing. A true pivot in every sense of the word.

Following that performance was a performer known as Poutyface, another internet sensation discovered through an app called Voisey. The moniker stuck from her writing down that lyric, and her and her manager both thought that was a good name, so they rolled with it. Her songs are full of trendy angst that hasn’t had time to fully develop yet, so perhaps that’s where the popularity is coming from. The drummer was fantastic though, and I hope that guy goes on to do some big stuff. Notable tracks included, “DEATHWISH,” “Never Fuckin’ Know,” and “God Complex.”

After a brief changeover on stage, it was time for The Score to take their place. Backlit from the neon sign crested with their logo, they swarmed to a commanding presence on stage as vocalist Eddie Anthony Ramirez could be seen high-fiving and fist bumping concert goers in the front rows. He’s such a great frontman, and you could tell that he was excited to be back out on the road sharing his message of positivity and energy.

The Score was arguably the best performance of the whole evening. From audience engagement to sound quality to lyrics…The Score will be a hard act to beat on this tour.

“How many of you here are here with your parents?” Ramirez asked the audience as several of the younger crowd goers raised their hands. “It might not seem like it right now, but when you’re older, your parents get pretty fucking cool – my parents are here in the back right now!” and the Nile Theatre exploded with applause and cheers. I think the parents who attended this show are going to keep that in their back pockets for a while, and I don’t blame them one bit.

They had the vocalist from Dreamers come out for a song called “Bad Days,” that seemed to go over well with the audience that was a collab between the two artists.

The highlight of the evening for me was when Ramirez jumped down and walked in the middle of the crowd during the final song of the night. He could be seen holding the microphone up to fans and singing with them, and almost everyone in the building was singing back lyrics at the fullest volume that their lungs and vocal chords would permit them to do. The Score is a force to be reckoned with, and they’re on track to prove that with this tour run.

Notable tracks included, “Legend,” “Born for This,” “Revolution,” and from their new record Metamorph “Head Up.”

The last act up to the stage was Dreamers, an eclectic mix of humans hailing from all over the place. Founded by vocalist Nick Wold, they’ve done some cool shit, jumping on Lollapalooza in 2016, going on tour with The Griswolds in 2017, and now they’re on tour again with The Score.

Dreamers brought a solid performance to the stage, while vocalist Wold said, “We’re dreamers, and you’re dreamers!” which might allude to how the name came to be. They’re ripe on the gimmicks, though, having two people walking around before the show passing around koozies with the band’s name on them (I may or may not be using one right now). Notable tracks included, “Black Confetti,” “Someway, Somehow,” and “Screws.” They also did a great job of their hit single, “Misfits T-Shirt.”

All in all, it was a great concert, full of things that you wouldn’t expect to find. A big thank you to the Nile Theater staff for working to keep everyone safe! Remember to wear deodorant, stay hydrated, and we’ll catch you at the next one!

Hello Gone Days Tour was Just What We Needed

BY JESS BECK | Go Venue Magazine What a spectacle of epic proportions this show was. I have to admit, I was not prepared for the theatrics or how impressive the light show would be […]

BY JESS BECK | Go Venue Magazine Do you have robot ears? Do you like to dance? Want to trade bracelets with people wearing enough neon glow to illuminate ½ of the Phoenix Metro? Then Gold Rush might […]