This was the last show for me this week that has included the likes of Sleeping with Sirens, Simple Plan, Sum 41, and Third Eye Blind.

I thought up until this point that my emo heart was full.

“Wow,” I thought to myself as I started this monster week. “This is my childhood. These are my memories. I fucking love what I do, and nothing is going to top this.”

Nostalgia is one thing, sure. And all the aforementioned acts draw on nostalgia even as they continue to work on new and exciting projects. But nothing compared (or would’ve prepared me) for the fuckery that took place on August 5, 2022 at the Marquee Theatre in Tempe, Arizona as Doll Skin, Cliffdiver, Less than Jake, and Bowling for Soup combined for serious (and not-so-serious) renditions of stage performances that were about as varied as the comedy section on Netflix. 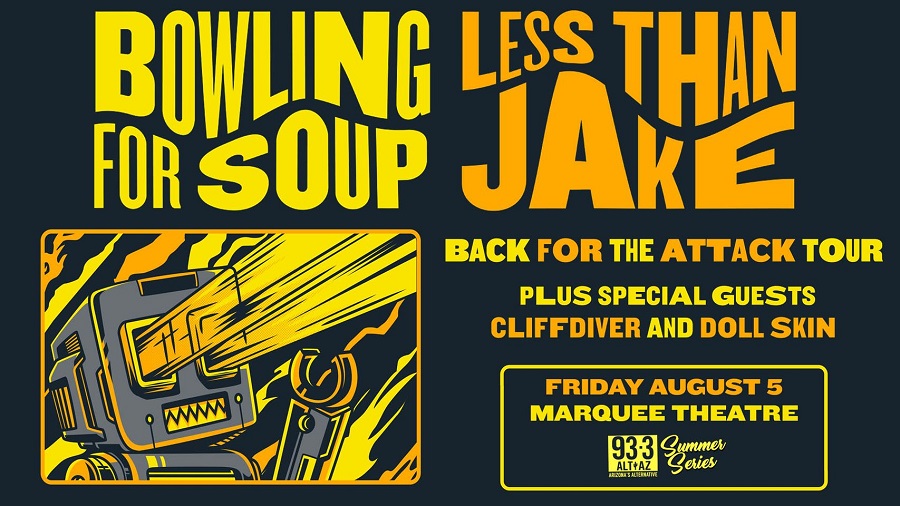 Sometimes the comedy is serious because it’s too real.

Other times the comedy delivers a message of positivity and healing.

Sometimes a comedy is old but hits like it’s brand new.

There’s a lot to unpack here, so stay with me – I promise it’ll be worth it.

Doll Skin was up first on the bill, and as Arizona locals, this was a homecoming show for them. I initially caught them in 2019 in Lincoln, NE at the Bourbon Theatre right before Covid shut everything down (they like…totally remembered me too since we’re all best friends). And while that might have been my last show for a long time, I’m glad it wasn’t my last time seeing Doll Skin. They have found a way to improve on all fronts.

Not only do they sound better, they also seem to have a more focused message they deliver to their fans, whom are lovingly referred to as the “Rat Pack.” Vocalist Sydney Dolezal came out swinging, hitting notes that I’m not sure they could’ve hit a few years back – so props to them for continuing to work on building their craft.

“Can I be an angry trans person for a bit?” they asked the audience. They spoke about how difficult it is to be a trans person in today’s world, and how they wished that simply existing wasn’t used for political purposes. They then rotated on audience participation on their single “Eat Shit” where the audience got to yell “UP!” and “SHIT!” when Dolezal sang “SHUT!” and “EAT!” which was a cool experience to see. They also rotated players between drums and bass which was a neat little trick that I didn’t expect either. This group is multi-talented, they’ve got a message, and I think they’re gonna blow up on the scene in the next year or so. Their sound is better, tighter, and they seem more focused. I would 10/10 recommend giving them a listen, and if you get the chance to see them on stage, I bet you won’t be disappointed as they bring their all to each performance.

Next up was a seven-piece (yeah, you read that right) outfit from Oklahoma that goes by the name of Cliffdiver.

And they’re exactly what happens when you feed musicians after midnight.

To say that I was blown away would be a massive understatement. This energetic group of misfits (like…most of them could pass as homeless, which is a fantastic barometer for how a band is gonna do live) lit up the room in a way that was completely unique. The elevator-emo-pop-punk-ska-jazz-whatthefuck band swung for the fences and it paid off. They’ve finalized their lineup with the addition of co-vocalist Briana Wright and set out to spread a message of positivity throughout the night. “Sometimes when you heal,” said co-vocalist Joey Duffy, “you have to realize that sometimes you’re the problem. So we wrote a song about it,” as they launched into “Frankie Muniz Don’t Smoke No Mids,” a track that is both smooth as butter and gritty as sand paper.

Together the vocals compliment like you wouldn’t believe, and Wright brings so much passion and soul to this outfit. It’s energy you can FEEL. Not to mention super saxy Dony Nickles kicking ass on his golden saxophone (yeah, I made the most cringeworthy saxophone pun – tell Kenny G. to call me so I can hang up on him) bouncing around like that thing was inflatable.

I got to meet up with the band after their performance, and thankfully for us Arizona residents, they confirmed that this won’t be the last time they’ll play here, so I’m excited to catch them when they make their return visit. Bassist Tyler Rogers said that the energy from this crowd was insane compared to what they’re used to, so they’ll definitely make a return to the Southwest corner of the country at some point (hurry the fuck up though would ya? I’m already anticipating seeing y’all again)!

In between sets, there was a group there called “Punk Rock Saves Lives,” which is a super cool team of humans focused on health concerns, human rights, and more. They were doing a drive for blood donors to sign up, and quite a few did from what I was seeing. To find out more about this non-profit, you can visit their website at www.punkrocksaveslives.org to see where they’ll be next or how to get involved!

Next on the docket was Florida outfit Less than Jake – a band that has been around since the early 1800’s and who also just got together last week.

Continuing the theme of elevator-emo-pop-punk-alternative-ska-jazz-whothefuckknows, they brought the heat to the Marquee Theatre with a blistering set list that included several of their better known hits. The theatrics were incredibly on point as they launched toilet paper from leaf blowers into the crowd during the 2nd song. One young fan in the front row even tried to make me a bracelet out of it, but it broke before we could get it done (there was also a secret handshake involved, so I’m pretty sure I’m Illuminati or some shit now).

This band rivals Don Broco in the level of energy they bring to the stage, so much so that trombone player Buddy “Goldfinger” Schaub fell off the stage at one point (he’s fine by the way). After the first song, lead vocalist Chris DeMakes rocked so hard he broke his guitar strings, which he promptly blamed on the audience for rocking out too hard (I mean like…yeah…this crowd went HARD). The Florida staple that has been around since the early 90’s continued to play banger after banger, also releasing inflatable balls into the audience, and were joined by vocalist Briana Wright during their final song of the evening. It was reminiscent of an A Day To Remember show, but it had a more intimate feeling to it. A higher degree of connection with the fans was evident as they certainly played to the crowd with hits like “Automatic,” “History of a Boring Town,” “The Science of Selling Yourself Short” and “Johnny Quest Thinks We’re Sellouts.”

This was my first time seeing these guys live, but I hope it’s not the last. These dudes might be on the precipice of turning 800 years old, but they played with all the energy of a pack of newborn puppies running into a field filled with steak and bacon (bacon, for the record, is totally Reddick’s favorite food. He denies it, but I think it’s an act).

After a short changeover on stage, it was time for the headliner – Bowling for Soup!

The middle-aged high school losers graced the stage with all the pomp and fanfare that is due a band of this caliber.

I’m still trying to figure out what the fuck happened.

This band…this band is probably the most audience aware, tone-setting band I’ve seen all week.

Have you seen that movie “Velocipastor” on Prime Video?

Bowling for Soup is the concert equivalent of that.

But Got-DAYUM…right out of the gate they played bangers like, “High School Never Ends,” “Almost,” and “Ohio,” which are arguably some of their most popular songs to date. They dedicated “Punk Rock 101” to Less Than Jake, and also had the audience chant for the other bands by name during the set.

“Hey!” front man Jaret Reddick shouted from the stage. “What the fuck is up with that bald guy? He looks pissed! Did you get in for free or something? You better look happy the rest of this fucking show buddy!”

Photo of bald guy below, no worries.

The theatrics were incredible, and the band members themselves are just as sarcastic and hilarious as you’d expect them to be. At one point in the show, Reddick said that he was going to perform a magic trick by telling the audience he was going to pull a bird out of guitar player Chris Burney’s ass.

Yeah…he just gave us all the bird.

“Hey! Did you know that we wrote the best theme song to the best TV show ever?” Reddick said to the audience to thunderous applause. “Yeah, we’re not gonna play it (boos from the crowd this time). At this point in our careers we just talk about all the cool shit we did. Like the time we got nominated for a GRAMMY!”

“Yeah, we lost, but you know what? So did BON JOVI, so I think we’re in good company,” Reddick said.

Then they played the theme song to Phineas and Ferb before thanking everyone for coming out to listen to a bunch of fat old men bitch about high school. They even took time in the middle of a song to do a photo op for the audience. But it was great, and everyone was back in high school that night. Only instead of being the losers we all were in high school, we got to be the cool kids. And this is why bands like Bowling for Soup are important. They have a way of transcending the current problems and speaking to you in a way that makes you feel like you’re the only one in the room. Sure, the music isn’t serious (that’s just a staple of pop-punk), but the content makes you feel like you can conquer the world.

And conquer we did.

As always, a BIG thank you to the Marquee Theatre staff, the super delicious looking security guard, the amazing fans that I got to connect with between the set times, for every band that played their guts out, and for the Punk Rock Saves Lives organization. What a perfect show to end the week on. Until next time, remember to tip your bartenders, please for the love of all that is holy in the universe WEAR DEODORANT, and be kind to each other.

Now if you’ll excuse me, I’m on my way to go kick my high school bully in the nuts.

BY JESS BECK | Go Venue Magazine 07.17.2022 Grayscale Dazzles @ The Nile Theatre You know it’s gonna be a good show when you drive up to the venue and there’s a line down the […]

REVIEW AND PHOTOS BY JESS BECK | Go Venue Magazine  “Wait…those MMMBop guys are still around?” Yeah – and they’ve built an impressive catalogue over the past 30 years, including 12 studio albums. This show had everything you could ask […]

All-American Rejects Give Us Hell at Hearts On Fire Fest

REVIEW BY JADE RICHELLE AND PHOTOS BY JESS BECK | Go Venue Magazine Hearts on Fire 2022. What. A. Night. Elder Emos came from all over the valley to re-live some of the best memories they […]