Mark my words – Sleeping With Sirens and Point North are eventually going to be our generations’ version of Styx and REO Speedwagon.

But it makes sense as they play SO well together. I covered them back in 2019 at the Bourbon Theatre in Lincoln, NE and they were incredible. Fast-forward to August 2, 2022, on a sticky Monday night at the Marquee Theatre (always a theatre of some sorts with these fellas, but when the world is a stage…) in Tempe, AZ, and it was no different.

Ok, it was a little different.

Both bands added new tracks to their lineup that didn’t exist in 2019.

Both bands sounded BETTER this time around than they did in 2019.

Hair color was also different from it was in 2019.

But one thing remained – the undying support and loyalty of the fan base, which is a good barometer for the direction a band is going in. 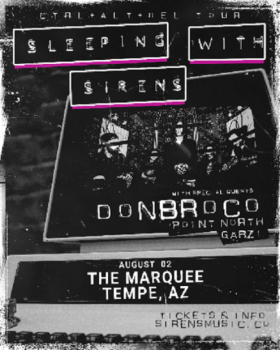 Kicking off the night was a young fella named Garzi who has racked up almost 300K monthly listeners on Spotify. I’ve gotta be honest, I wasn’t super familiar with this artist as I’m not as up on the new emo-rap trend (I’m old, leave me alone and get off my porch), but the energy this fella brought to the stage was incredible.

From the moment he set foot on that stage, he became a human pendulum bouncing from one side to the other. Between playing his heart out and hyping up the other acts to follow, Garzi (along with bandmates) set the tone for what was to follow that evening. After his set was over, I let him meet me, and he told me that it was the best moment of this tour so far for him.

(Ok, so that didn’t happen, but you can imagine what it would be like if he did…)

Anyway, following Garzi was this little band called Point North, whom I’ve covered three times now in a short time frame. The last time I saw Point North was in Texas at the SoWhat?! Music Festival, and they brought the same energy from that hot Texas day to Phoenix last night. And the great thing about these guys is they always put on a great show. I have not once been disappointed in a performance that I have seen from them, but the best part for me was when vocalist Jon Lundin asked the audience who was seeing them for the first time, and a good portion of the audience responded with hands raised.

Why was this my favorite part of their set? Because it means that hundreds of spectators got to experience one of my favorite acts for the first time and get blown the fuck away by how incredible they are.

And if you haven’t given them a listen yet, what the fuck is wrong with you?

Asking if anyone’s favorite holiday was Halloween, Lundin asked if he could bring some October flair to the show (which in a crowd full of Emo and Goth geeks…duh that was gonna go over well) and then proceeded to play “Ghost In My Home” which got a very positive response from the audience. Other notable tracks for me included “Erase You,” “Nice Now” (which is a personal anthem for me) and of course, when they brought out Kellin Quinn for their collab on “Into the Dark.” I also let Jon meet me after the set was over (he like…totally fan-girled and remembered that we had met like…4 years ago one time at a venue 2100 miles away…um…yep…), and he’s just a super chill, humble dude, and I think that’s what I love so much about this trio – you can tell they believe in what they do, and if they happen to gain new fans, that’s just a byproduct of their passion for the music they play.

Next up was a European outfit called Don Broco.

You remember that story in the bible where Sampson gets his strength from the length of his hair?

Don Broco is like this in a way, only instead of getting power from their long hair, they absorb the energy from the audience. It’s like in Monster’s Inc., where they put the laughing chambers in at the end of the film – only instead of laughs it’s just pure, raw, unfiltered energy.

Fuck it – have Don Broco power the California grid, and then maybe people could charge up their electric cars again.

I have rarely seen such energy from start to finish from ANY live act I’ve covered in 6 years. I’m exhausted just thinking back to their performance, but holy shit did they put on a spectacle for the evening. They came out and commanded the audience in similar fashion to how Parkway Drive does, and I’m pretty sure that if vocalist Rob Damiani told the audience to stab the person next to them, they would’ve complied. Thankfully, he only called for most pits and swirling shirts, but you get the idea.

Each member (besides the drummer, but like…drummers are pretty stationary, so you can’t fault him for that – love you Matt Donnelly!) was a cross between an Energizer Bunny and one of those bouncy balls you can get from a vending machine as they plastered the audience with banger after banger. Notable tracks for me included “Everybody,” “Gumshield,” and “Bruce Willis.”

If you can, give these fellas a listen on whatever streaming platform you use. You’ll love ’em if you’re a fan of the Beastie Boys, psychedelics, and protein powder for breakfast.

Last but not certainly not least, Emo-sex-symbol Kellin Quinn, his orange mic, and his collection of misfits graced the stage amidst flashes of light, ear-piercing screams and earthquake level applause. From the second Sleeping With Sirens took the stage, the rest of the night was history as Emo hearts exploded from the front gate to the back of the venue.

Kellin is undoubtedly a master performance artist who cares about the fan base the band has cultivated over the past decade. After the first song, Quinn encouraged the crowd to pick up people who fall down in the mosh pits and to look after each other (unlike that piece of shit Travis Scott), and even stopped the final song of the evening to personally ask a member of the audience if they were alright.

That’s what I love about this band – they fucking CARE about who they play for and who they play to. They get it. Yeah, we all want to wild out at a show, but these shows are just as much about community as they are experience, and that’s something that I absolutely love about the awareness of Quinn. Sure, he might bounce around the stage so quickly that if you blink you’ll miss him, but he’s so in tune with the audience.

Bass player Justin Hills and guitarist Nick Martin also gave quite the spectacle to the fans, bouncing around from one end of the stage to the next as adoring fans continued to sing every line back to the band throughout the night. Notable tracks for me throughout the evening included “Kick Me,” “If You Can’t Hang,” “Better Off Dead,” and “Bloody Knuckles.”

Rumor has it that they’ve also got a new album dropping soon…so keep an eye out for it!

This was my first experience at the Marquee Theatre, and while some other people who were there told me how much they hated it there, I loved this venue, and it’s easily in my top 3 that I’ve shot in down here in Phoenix. It felt very much like the Bourbon Theatre that was essentially my second home back in Nebraska, The staff were incredible, patient, and kind to every single patron who filed through those doors. Is this my new home away from home? Time will tell, but I’ll say this, if I ever get the chance to shoot another gig here, I’m gonna jump on that shit faster than Don Broco jumped around on stage.

BY JESS BECK | Go Venue Magazine You know that phrase, “New year, new me!” Well…that’s kind of how it feels down here in Phoenix now that I’ve been here for about four months. “New city, new […]

BY JESS BECK | Go Venue Magazine Alright, back story. Don’t groan, you love this shit. I became a fan of Neck Deep shortly after I started shooting concerts professionally. It instantly became a personal goal of […]

BY JESS BECK | Go Venue Magazine It was quite the impressive display of talent, hair, lights, and music on a blistering Wednesday evening on 07.20.2022 at the Ak-Chin Pavilion in Phoenix, AZ as Loverboy, Styx, and REO Speedwagon let their powers combine to bring us everything […]