Saturday, August 6 marked the return of River Riot, the annual 89.7 the River-produced festival. Thousands of people gathered at Westfair Amphitheater to see Rob Zombie and Mudvayne under the hot Iowa sun. 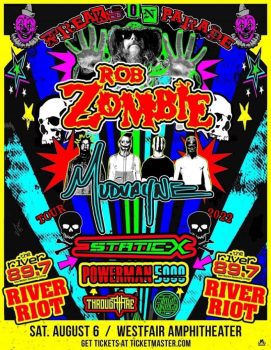 To kick things off was The Tale Untold from Omaha. I was super excited to see these guys were on the bill, as I’ve known them for about five years while attending shows on the local scene. They also know how to really market themselves, such as putting a giant-sized QR code for their social media on the side of the stage. But, overall, for being, arguably, the heaviest band on the bill, they crushed their opening set. I could definitely tell they gained some new fans. It was a great start to the show.

Through Fire from Omaha made their 4th return to the Westfair stage. 89.7 the River has done so much for these guys, I understand why these always keep on coming back. But, this time around, they had a lineup change, bringing in the Halverson twins, Tyler on bass and Zach on drums, from the Des Moines band, Awakening Force. Those two brought a youthful energy to the group, a breath of fresh air for the band. Guitarist Justin McCain told this very touching story about his late brother, who had been a big fan of Mudvayne, and Chad from the Mudrayne giving Justin his wristbands to put on Justin’s brother’s grave. It’s always nice seeing Through Fire. Hope this new iteration can crank out some new tunes soon.

Powerman 5000 made their return to Westfair since they played River Riot in 2015. They are another band that knows how to have a good time on stage. Spider One, who is the younger brother of Rob Zombie, just knows how to control a crowd. The crowd was itching for that nostalgic feeling, so when tracks like “Nobody’s Real” and “When Worlds Collide” kicked in, the crowd went wild! I love this band’s energy, and they are always welcome to play at Westfair at any time.

Legendary industrial metal band Static-X took the stage by storm. Both Static-X and Mudvayne hadn’t performed at Westfair since Rockfest 2009, so this was a return in the making. Sadly, Wayne Static has been no longer with us since 2014, but the original band members felt it was time to honor Wayne’s legacy, bringing on a new frontman, simply named “Xer0”, donning a Wayne Static mask. The fans went along with it, feeling grateful to hear these songs live, again. These last four bands on the bill brought nostalgic energy for the rest of the night, it was almost like we all went in a time machine to the early 2000s.

As I previously mentioned, it was 2009 since Mudvayne was active. So, this was a long time coming. Lead vocalist Chad Gray is a goddamn madman onstage, even going out into the crowd. He is a very passionate man regarding the genre of heavy metal, giving impassioned speeches on how important metal is for the next generation. This is a totally different vibe than when he was in Hellyeah. The aggression was insane. The energy coming off that stage was insane. This audience was hungry for Mudvayne. They ended their set with their signature song, “Happy?”, which a ton of people knew the words to. I hope it doesn’t take over ten years for Mudvayne to return. Here’s to hoping they have new material cooking up very soon.

Finally, the man, the myth, the legend, Rob Zombie, returned to the Westfair stage. This man is a staple to Westfair, having this being his fourth time, which is the most for a headlining artist, so he is no stranger to the outrageous these Council Bluffs crowds are. With Rob Zombie, you get the whole package. It’s a dance party spectacle with giant walking behemoths with a light and video production you can see for miles. You haven’t lived if you haven’t shaken your ass at a Rob Zombie concert. That’s the rule. I am always impressed by John 5’s rapid guitar playing, one of the best to ever do it. They even put on the trailer to Zombie’s upcoming new film he directed, The Munsters, a weird flex, but I will allow it. There is no party like a Zombie party, and for a man who is 57 years old, he still looks damn good doing it. I hope Rob Zombie continues to perform up until his 80s, Wayne Newton-style. It was successful 89.7 the River-produced festival. Also, shout out to Mammoth for putting this festival on, as well. I look forward to the next one.

BY JOE DeSANTI | Go Venue Magazine On Friday night, August 30th, two of my favorite rock bands from the 1990’s invaded the Stir Cove in Council Bluffs, Iowa, and I couldn’t have asked for more. Concertgoers […]

REVIEW BY DAVID TAYLOR and PHOTOS BY ROBERT A CHADWICK Saturday, March 12 marked the return of Tool to Omaha, their first time in the city since September 2002, a much awaited return. 10,000 people […]