Metal was alive and well on Tuesday, April 26 in Omaha, Nebraska as the Metal Tour of the Year featuring Megadeth and Lamb of God came into town to play Baxter Arena. The pits were ragging and the heads were banging! 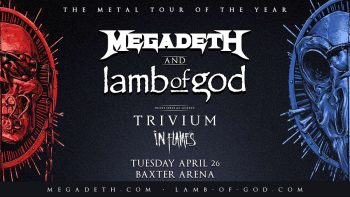 In Flames from Sweden opened the concert up. Their brand of metal issued a strong response of the crowd. The band is finally on the second leg of the Metal Tour of the Year because they couldn’t be on it last year due to visa issues during the ongoing pandemic. They were very humble on stage, with lead vocalist Anders Fridén being communicative with the crowd. It was cool noticing Chris Broderick, former guitarist of Megadeth, playing with them. They played older material like “Behind Space” from their first album, Lunar Strain to “I Am Above” from their latest album, I, The Mask. They ended their set with their signature song, “Take This Life”, such a ripper of a song. It was a great start to the night!

Trivium from Florida was the direct support before the co-headliners. This quartet was out to cause chaos inside Baxter Arena. The riffs and guitar solos were through the roof, led by Matt Heafy and Corey Beaulieu. They are in support of their latest album, In the Court of the Dragon. Matt Heafy’s voice is better than ever. The highlight of the night was when they played kicked into “In Waves” and the crowd went berserk. For roughly fifteen years, Trivium are still one of the quintessential American metal bands staying relevant.

Lamb of God from Richmond, Virginia was the first of the co-headline. This band was made to play arenas. Their epic-sounding music filled the entire arena. I was so glad lead Randy Blythe made it to the concert because last week, he contacted COVID-19, in which they didn’t cancel any performances, but brought on Mark Hunter of Chimaira and Joe Badolato of Fit For an Autopsy to fill in for him. So, this was his second performance back fronting the band and we had energy like he didn’t miss any shows. Randy jumped around the stage like a wild animal. It was also cool seeing Phil Demmel of Vio-lence and formerly Machine Head on bass, fill in for John Campbell, as he is dealing with a family emergency in Virginia. My highlight from them was actually the giant mosh pit when they played “Redneck”. I have never seen a pit that big at a show in Omaha. The Omaha metalheads surely came out in full force. Lamb of God always crushes live, but seeing them in an arena setting took it to another level.

One of the Big Four of thrash metal, Megadeth, closed out the concert. I think it’s about time to give Dave Mustaine his flowers. The man is a rock legend. He is a focused musician, who realized to talk to the crowd early on in the show and had to stop himself for that. They have had a catalog of songs for four decades. Megadeth still remains a live performance force, featuring some of the best musicians in the world. They brought quite a bit of production with them, such as video boards and two versions, one small and one large, of their mascot, Vic Rattlehead. They ended their set with a blistering rendition of “Holy Wars… The Punishment Due.” I hope this concert sent a message that, even on a Tuesday, heavy metal is still alive and well in Omaha, Nebraska.

LIVE REVIEW: Blue October Turns on the Heat During a Chilly Night

The Third Time’s A Charm For Alan Jackson Fans

BY JOE DeSANTI | Go Venue Magazine After rescheduling two times due to a death in the family and an upper respiratory infection, Alan Jackson took over the CHI Health Center in Omaha, Nebraska on […]