Wednesday nights are not your typical nights for a big rock show. Not unless you are Shinedown and then people will flock over to and packed the Pinewood Bowl Theater in Lincoln, Nebraska. And that is what happened on Wednesday, September 22. 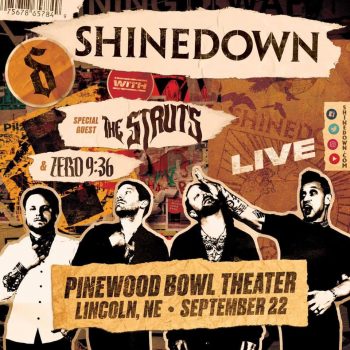 Zero 9:36, a rapper from Pennsylvania, kicked off the festivities for the night. The show started a little earlier than scheduled, so it came as a surprised to the crowd. Major respect for a rapper to have a backing band, giving so much authenticity to the performance. Also, I really enjoy a multifaceted rapper that can also sing, especially without the use of autotune. It was cool seeing people react to his biggest hit, “Adrenaline”, showing signs this guy is still rising high.

The Struts from the United Kingdom was the direct support for the night. I’ve been really looking forward to finally seeing this band live, and they did not disappoint. They are such a rare breed of a band. Their music is straight up glam and classic rock with a modern twist. And they do it with such a pizzazz. If this is how it felt like when Queen started playing the United States in the mid to late 1970s, then sign me up! We need more frontmen like Luke Spiller. It seems he was born to sing and entertain. Keep on writing those songs you can sing-along, The Struts! I can’t wait to see them grow even more.

Finally, it was Shinedown’s turn to hit the stage. It was a little chilly and there was no pyrotechnics, but Shinedown brought the heat to the stage! I’ve only seen them live only once before, but Brent Smith gave one of the best vocal performances I have ever witness. My god, the power of his voice can carry all the way to the top of the hill of Pinewood. All of the members just looked like they were having a good time. Zach Myers continues to be one of the most underrated guitar players. Eric Bass, bassist, is a virtuoso on the keys and the vocals. Drummer Barry Kerch just crushes the skins. Overall, a stellar performance from Shinedown. I look forward to what they cooked up for album #7.

As Tom Petty legendarily told us, “The Waiting is the hardest part”.  As we all know last year’s festival was scratched due to the pandemic. Maha is proud to announce that the waiting is now […]

STYX AND LARRY THE CABLE GUY GIT-R’-DONE BY “ROCKIN’ THE PARA….ERRR PINNACLE”

BY DEAN BIRKHEIMER | Go Venue Magazine “I don’t know about these new bands, but I know people will be listening to REO & Styx 200 years from now” -Larry the Cable Guy- When you […]