When you think shock rock of 1990s, you immediately think of Rob Zombie and Marilyn Manson. What a perfect package they would be if they toured together. Well, have no fear, as these two have been touring together on and off since 2012. And they decided to drop by Westfair Amphitheater in Council Bluffs, Iowa on Sunday, July 21. 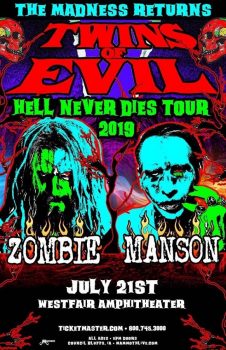 After a couple schedule changes and waiting patiently, Marilyn Manson finally went on at 8:15 p.m. I was looking forward to seeing him live for a long time. This was a version of Marilyn Manson where he did not give a damn about his antics. He was throws microphones on the ground, pissing off the stagehands around him. But, performance-wise, I was eating it all up. He really love going into the crowd, eating up their energy up. I think if the crowd wasn’t as enthusiastic as they were, it might’ve been a very different show for Manson. He played a total of nine songs for one hour, such as “The Dope Show”, “The Beautiful People”, and his cover of “Sweet Dreams (Are Made of This)”. This version of Manson is so much different than the one we got in the 90s, as he is dealing with middle age and what comes with it, but he is one of the last living rock stars and I was honored to see him live, finally, regardless of his antics.

Rob Zombie closed the co-headline. This was my second time seeing him live, after seeing him at Westfair in 2016. You could say he saved the show, as he is more of an entertainer, a showmanship, if you will. That man can control a crowd for days. For being 54 years old, Rob Zombie can move better than a lot of frontmen. And he still looks good doing it. One of my favorite things about him is that he brings out these larger than life monsters out that dance to the songs they are playing. Just goes to show that Rob Zombie wants more than a concert, he wants to bring a show. John 5, guitarist, always proves that he is one of the greatest guitarists to grace the stage. He played all the hits and a good chunk from his last album, The Electric Warlock Acid Witch Satanic Orgy Celebration Dispenser. Be sure to check out his next film, 3 from Hell, and he should have a new album out by next year. Thank you 89.7 The River and Live Nation for bringing these two legends to the metro area!

ALBUM REVIEW: ‘Invasion’ by John 5 and the Creatures

Release Date: July 31 2019 Prepare for the Invasion of John 5 and the Creatures in their explosive new album that shreds, taps and riffs into the soul and relentlessly beckons you want more! BY […]

BY DEAN BIRKHEIMER | Go Venue Magazine “A naked woman in heels is a beautiful thing. A naked man in shoes looks like a fool.” – Christian Louboutin As I approached Stir Cove, and before […]

A semi truck hauling Rob Zombie’s sound equipment overturned in Eastern Montana early Thursday, sending its driver to the hospital and delaying the bands’ scheduled concert in Billings. Around 4 a.m. on Thursday, the semi […]