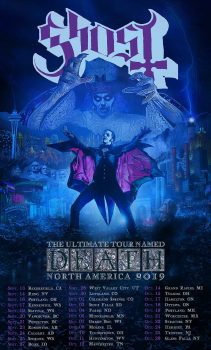 After seeing Ghost more than 20 times one might think, what could possibly be new?  Why keep seeing this band?  Well, there’s a bit of nostalgia of course, especially when they play their older songs. That takes me right back to 2013 when I first discovered them. But as much as they aren’t the same band from back then, they really still are. The live performance breathes life into the mystique and magic of Ghost. The way the Ghouls interact with each other and with the Cardinal, much like they interacted with Pàpa, makes a Ghost show a personal experience.

They play to the audience and reach the individual in the crowd just the same whether playing a small venue or a large arena.

Tonight I had the pleasure of seeing Ghost at the Rabobank Arena in Bakersfield, California to kick off their Ultimate Tour Named Death, and as usual, they did not disappoint. They surprised us with the release of two new songs the day before the show, so I was hoping they would play at least one of them at the show tonight. They played ‘Mary on a Cross’ early in the set and it sounded amazing, and is still stuck in my head at the moment.

While I would have loved them to play a lot more from their first two albums, the show was still packed full of energy and amazing songs. The Cardinal was much less talkative than the Pàpas have been in the past, but he’s the new guy, so I’ll cut him some slack. We also saw the plague doctors come out to lurk about a darkened stage with their lanterns.

What could they be foretelling?  Possibly the next incarnation of the Ghouls?  Are they bringing about the plague to plunge Ghost back into the darkness for a return to a more sinister, malevolent time?  How would YOU write the next chapter of the Ghost saga?  Personally I am enjoying the ride so far, so I’ll let them keep telling it. I have a feeling we are in for more surprises, some laughs and more great music and performances along the way!

BY MAURICE NUNEZ | Go Venue Magazine Sunday evening in Los Angeles, a perfect evening to spend with Mortiis. Mortiis is from Norway fronted by Håvard Ellefsen. He was a former bassist for Emperor in […]

The 69 Eyes & Wednesday 13 Take Over Brick by Brick

BY MAURICE NUNEZ | Go Venue Magazine Halloween came early to San Diego this year as The 69 Eyes and Wednesday 13 were in town as part of the “Hell Has No Mercy 2020” tour. Go Venue was there […]