Quintessential Irish-American folk punk band FLOGGING MOLLY will be releasing two unreleased tracks from their Life Is Good recording sessions just in time for their St. Patrick’s Day celebration at Hollywood Palladium. The first installment “Going Home” is now available worldwide via streaming services. The second portion “There’s Nothing Left Pt. 2” will be released on March 16th. The band just wrapped up their European outing with Dropkick Murphys and is already back on the road on their Life Is Good Spring 2018 Tour in support of their first new album in over six years.

“I think for me it comes down to being on the road for the past twenty odd years or so,” explains vocalist Dave King. “Sometimes, it’s hard to distinguish where home actually is. But, I’ve realized that traveling and working with my wife that home is wherever I want it to be.” 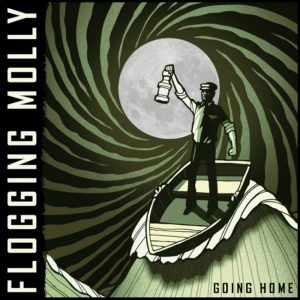 Life Is Good was produced by Grammy Award-winning producer Joe Chiccarelli (Counting Crows, My Morning Jacket, Manchester Orchestra). The album is mature, well crafted, equally polished and almost aggressively topical. It’s filled with rousing songs that are timeless in their sentiment, but directly related to today’s most pressing concerns: politics, the economy, unemployment, planned boomtowns gone bust, immigration policies gone awry, and much more.Life Is Good serves as a wake-up call to those who have simply stood by while far reaching political decisions were made that had serious impact on them.

Flogging Molly is celebrating their 20th Anniversary as a staple in the punk scene. The band started out as the house band at Molly Malone’s and built a loyal following. A few of their influences include The Dubliners, The Pogues, Johnny Cash, and The Clash. They’ve built a massive following through endless touring and even have their very own boat cruise which has hosted everyone from Rancid to NOFX to Less Than Jake to The English Beat to The Bouncing Souls to Frank Turner to Gogol Bordello. This year they’ll be hitting the high seas on their annual Salty Dog Cruise featuring The Offspring, Buzzcocks, The Vandals, Lagwagon, The Adolescents, and more. 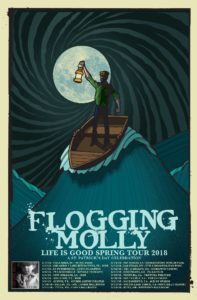 CONCERT REVIEW: Flogging Molly’s SOLD OUT Show at Ace of Spades in Sacramento

March 21, 2018 – Sacramento, California Scott Biram sounded like a cross between a country and rock and roll. I would love to listen to a longer set. He was a great opener and made […]