It’s always interesting to shoot shows in other cities that you aren’t super familiar with. Having relocated to the Phoenix Metro roughly 5 weeks ago, I wasn’t sure what to expect from either the venue or the attendees for Beartooth on April 7, 2022, at the Van Buren in Phoenix, AZ.

I was dropped off at the corner of the building where I had a brief run in with Caleb Shomo, wished him luck at the show and told him to watch for me in the pit (he didn’t but hey, a guy can ask right?). 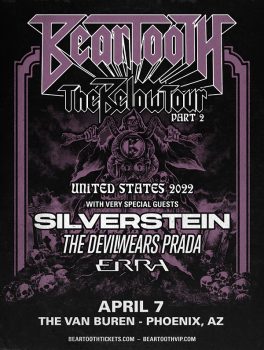 The Van Buren is a stunning venue right in the heart of the Phoenix Metro. They had ALL of the amenities – sizeable bathrooms so that more than one person at a time could go, super friendly staff and security, AIR CONDITIONING (which is a huge deal here in Phoenix – it’s not even summer, and it’s already sweltering heat on most days), and a huge patio/beer garden.

This might be my new favorite venue so far.

But on to the show!

Erra was up first, and I have to admit, I wasn’t super familiar with these guys, but holy fuck did they put on a great show! And honestly, I think that’s a key component to finding an opening act – how well do they spark the crowd? How engaging are they?

If I’m being honest, I was absolutely blown away by Erra. The thoughtfulness of the performance was so understated, but they put on a tight show that really resonated with the audience. Everything from the lights to the energy was spectacular. They played roughly a 30-minute set, but it was enough really get the audience moving around as more and more humans flooded in to see this sold out show. Their new album was released in 2021, called Erra and it’s an absolute MONSTER that you should check out immediately!

After a brief interlude for change over (which included everyone singing along to System of a Down during the interim), TDWP (or The Devil Wears Prada, however you want it) took the stage. If I had to guess their favorite color, I’m assuming it would be STROBE LIGHT as it was a dazzling display of…well…you get the idea. Frontman Mike Hranica was on fire, somewhere between Michael Jackson meets a seizure, but holy fuck did that guy know how to work a crowd. His movements were so sporadic that at one point he knocked his own microphone down, but it made for one great experience to say the least. It was a very visually appealing set, and they did what they set out to do on yet another tour (these guys always seem to be touring – like Kiss, but with actual good music).

Next up was the absolute LEGENDS in Silverstein. I’ve been a fan of Silverstein for a long time, so to finally be able to see them live AND photograph the show was fuckin sweet. They came out in a blistering heatwave of banger after banger, playing a mix from their more recent tunes to pumping up the crowd with old school Emo bangers from their 2003 album When Broken Is Easily Fixed (one fan showed me his memorial tattoo of this album as he had the cover art as a half-sleeve). I will admit – I’m not sure how frontman Shane Told played the whole set in a leather jacket, but hey…it must have been cooler on stage than he was letting on (which is a lie – I was in the pit, and it was hot as balls).

After the set was concluded, the band showered the fans with gifts ranging from guitar picks, drum sticks, and paper airplanes, which were gobbled up faster than a set of good Baptists devouring potato salad at a potluck. I got to chat with Josh Bradford as I was leaving the venue about how he had a layover in the town I grew up in, but we both agreed that we enjoyed palm trees and mountains better than the flat lands of Nebraska. It always surprises me that these musicians who are mega stars in the eyes of so many are actually just…you know…humans…quite like the rest of us. He’s a super nice fella, genuine, and I will forever sing Silverstein’s praises, even if it was just based on that one interaction.

When Beartooth took the stage, they pulled a play straight out of the ADTR playbook. Giant curtain, ACDC blaring through the PA system, and at the drop – a perfectly timed confetti canon shot straight out into the crowd. Since we were only permitted songs 2, 3, and 4, I wasn’t able to capture any images of it, but it was still pretty exciting to see. They played a number of their bigger hits, including several from their new album Below, kicking off with the title track from the album.

Shomo manically paced back and forth on the stage, switching regularly between jumping and sprinting, but it allowed him to get the crowd actively involved in the performance as he would pause in certain spots during the songs to let the crowd fill in the vocals for him. I’ve always been curious to know what that feels like as a musician to have such a large crowd echo back the lyrics you’ve spent so much time perfecting.

Caleb went on later in the performance to announce that he has been 113 days sober, which is a huge deal. “I didn’t know if I would wake up the next day or not, and I was looking for something, someone, to pull me out of it. And then I realized one day that it was me. I had to do it for myself,” which led into “In Between” which is arguably one of their best and most recognizable tracks.

The bands have a lengthy road ahead of them as they continue their tour, and I certainly hope that the other nights are just as energy fueled as this night was. Every act brought something unique and magical to the stage, and you could tell that this probably won’t be the last time you catch any of these acts in Arizona. Big shout out too to the Van Buren staff for holding it together during the mosh pits and crowd-surfing madness. They were professional and courteous throughout the entire evening, and they definitely made it an enjoyable experience all the way around!

Beartooth, I Prevail, and A Day To Remember Unite to Take Down the Silverstein Eyes Centers Arena

BY JESS BECK | Go Venue Magazine Holy shit. This was the perfect show for anyone whose favorite color is STROBE LIGHT. I have to be honest here for a moment – this was an absolute […]