It was a cold, rainy night for April 29, but that did not stop the metalheads of Omaha and nearby areas. They came out full force to Sokol Auditorium, nearly selling out the place. It was the return of Anthrax, who hadn’t played Omaha since 1998, opening up for Pantera. Anyways, let’s get to the review! 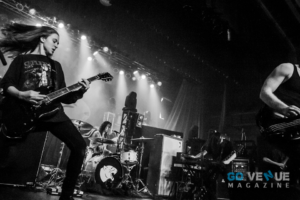 First band up was Code Orange, from Pittsburgh, PA. I had heard little from them, but was going in with fresh ears. And I was impressed. They went in there, guns ablazing. I would say their sound was a mix of hardcore, progressive, and black metal. There was so much energy in their live performance. They kicked off their set with the first song and title track of their latest album, Forever, which came out in January of 2017. Their bass player, Joe Goldman, had the most energy I had ever seen in a bass player. He was also the most photogenic with many faces he made. Another surprise was their drummer, Jami Morgan, was the frontman. Usually the drummer is not the frontman, but in this case, he was. But what impressed me the most was one of their guitarists and vocalists was a woman, Reba Meyers. She screamed and played guitar better than a lot of the guys. I was in love. On the song, “Bleeding In the Blur”, Meyers actually sang clean vocals. The song has an early 1990s grunge feel to it, reminiscent of Nirvana. I was thoroughly impressed with Code Orange as an opening band and a band, in general. The energy they gave off that stage was going to be hard to top for the rest of the night. 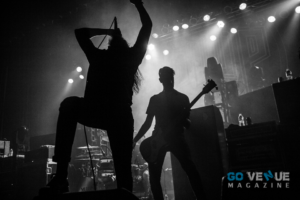 The next band was The Devil Wears Prada, hailing from Dayton, OH. The last time I saw these guys were on the Mayhem Festival in 2015. They opened up their set with “Daughter” off their latest album, Transit Blues, which came out in October of 2016. They had gone of a couple of member changes, but still manage continue on. They gave off such a high energy live performance. They blended some old songs and new songs. Mike Hranica always gives 110% in his live performance. His emotion to every song he delivers is awestruck. Guitarist and clean vocalist Jeremy DePoyster never hits a sour note. In my opinion, overall, they gave a pretty average performance. It seem like a typical The Devil Wears Prada support set. If they were headlining, they probably would have more emotional value to their set. I enjoyed it, but it just wasn’t up to par with the other three performances from the night. 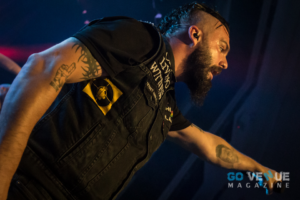 First of the co-headliners was New England’s own Killswitch Engage. This was my fourth time seeing them and they never disappoint. One of my favorite things about Killswitch Engage shows is their entrance music. They usually have some 80s song, with some jokes in them. Always a good start to a good time. They kicked off their set with “Hate By Design” off their latest album, Incarnate, which came out in March of 2016. Jesse Leach is probably one of the greatest rock frontmen ever with his energy and his delivery of such poetic lyrics. No sour notes at all. The man knows how to control a crowd. And then there’s Adam D. Adam D is such a character on stage. Jumping up and down, making goofy faces, that man is a constant energy. He even manage, during “The End of Heartache”, to run to the bar to get a beer. There is no one like him and I respect him for that. But, the biggest reaction of the night was their cover of Dio’s “Holy Diver” and having onstage none other than Joey Belladonna of Anthrax to help sing. Leach let Belladonna took the reigns of the song as he did amazing tribute to Ronnie James Dio, who tragically passed away in 2010. Killswitch Engage are always an Omaha favorite and it’s no question why they always come back, putting on an amazing show. 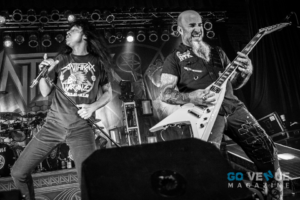 Finally, it was the band everyone was waiting for: one of the Big 4 of thrash metal, NYC’s own Anthrax. They kicked things off in true thrash metal fashion, fast and hard with the title track of their 1987 album, Among the Living, which turned 30 years old this year in March. They also played “Blood Eagle Wings” and “Breathing Lightning” from their latest and 11th album, For All Kings, which came out in February of 2016. They were a force not to mess with. They packed in an energy that they had when they were in their 20s. Scott Ian’s, guitarist, right hand is weapon of mass destruction, detonating atomic power chords left and right. Frank Bello, bassist, still has his youthful energy with that grin he makes he plays his bass. Lastly, Joey Belladonna is probably the most humble and nicest frontman in rock n’ roll. Always engaging with the crowd, cracking jokes with them. And his voice still sounds amazing for his age. No sour notes. Always fun to watch. They ended the night with “Indians”, another song off Among the Living. In typical Anthrax fashion, during the middle of the song, they yelled out, “WAR DANCE” and the pit erupted. The return of Anthrax was now complete. They put on an energetic set that people had been waiting for a long time. The wait was worth it. Let’s hope it won’t be another almost twenty years that they come back because this show was definitely one to have them begging for more.

To view more photos can be seen below, hope you enjoy viewing those photos: