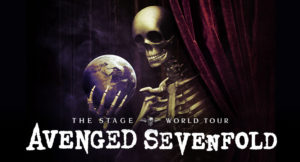 Last year, Pinnacle Bank Arena in Lincoln, Nebraska had their first heavy metal concert with Iron Maiden and Ghost. Many people attended the show, nearing a sell out. And then a month later, In This Moment played there, having it moved from outdoors to indoors, another well attended show. I wonder who would top those two shows. And then Avenged Sevenfold announced their North American tour with Breaking Benjamin and Bullet for My Valentine. This was the premier winter rock tour, with a couple shows on the tour having been sold out. For being a Thursday night in February [8th], I was amazed to see the arena almost completely full. All three bands have songs that an average heavy rock fan would know, making this such an appealing show to attend.

Wales’s own Bullet for My Valentine opened up the show. The last time they were Nebraska was in May of 2013, so it was a long time coming for them. Their entrance music was Carl Orff’s “O Fortuna”, which has been used in many films and TV commercials. Then, they ripped through their opening song, “Your Betrayal”. These guys really know how to shred on the guitar. Matt Tuck, singer and guitarist, and Michael Paget, lead guitarist, melted everyone’s faces with their guitar solos. The set feature more recent material rather than their older material. But, manage to pull of an incredible opening set. I hope to hear an upcoming album from them before the year ends.

Next up was Breaking Benjamin. This was my fourth time seeing them live. They are truly one of the best live rock bands out there. The amount of hits they have in their catalog is insane! Everyone in the band is a great musician. Benjamin Burnley’s voice never deteriorates. My favorite part of their set is always their covers. I love how big of a nerd Benjamin Burnley is and how he is a massive Star Wars fan, just like me. So, they do this cover of the Imperial March and he has this percussion setup with lightsabers all over it that lit up. It was truly a sight. I will also give props to Aaron Bruch, bassist, for losing weight because he looks really good onstage now. Their new album, Ember, comes out on April 13, featuring the lead single, “Red Cold River”. I’m so glad they’re putting out more music after Dark Before Dawn, having them here to stay.

Finally, it was Avenged Sevenfold’s turn to hit the stage. I’ve been listening to this band since I was in eighth grade, so they really mean a lot to me. This was my second time seeing them live and they also hadn’t been in Nebraska since 2013. This was their first headlining North American tour supporting their latest album, The Stage, so they were going to pack as much production as possible to bring the audience a one of a kind experience. And they just did that what amazing graphics and lighting and video boards. It was truly a spectacle. They opened up with the title track, “The Stage”, which earned them their first Grammy nomination. I was impressed how much they blended their old and new material very well. M. Shadows’s vocals are very underrated. Synyster Gates and Zacky Vengeance’s guitar playing is unlike any other. One of the stand out moments of their set was when they performed “Higher”, an inflatable astronaut with a skull in the helmet appeared. It was a haunting sight, but an awesome one. Another stand out moment was their cover of Pink Floyd’s “Wish You Were Here”. They truly made it their own and had everyone singing along. It was amazing to see all these people attend this arena sized level show in Lincoln, Nebraska, a market that doesn’t get the recognition it deserves. I hope more hard rock and metal tours, both large and small, consider Lincoln, or even Omaha, as a considerable date with the amount of people that were there. Rock was not dead in Lincoln, Nebraska that night, that’s for sure.

Bullet for My Valentine

BY JESS BECK | Go Venue Magazine It was a great day to be in Nebraska. The Huskers won almost uncontested against an unranked opponent, and following the game, Lancaster GhettoBlaster took the Bourbon Theater by storm, pounding out hours of […]

Pinnacle Bank Arena puts on many concerts every year since 2013, spanning either rap, pop, country, or rock. July 9, 2017 was a first for them: their first heavy metal concert. Who none other than […]