“Rock was born in the South, so saying ‘Southern Rock’ is like saying ‘rock rock.’” – Duane Allman

Thank you for dining with us, tonight’s “SPECIAL” ….. ROCK & ROLL 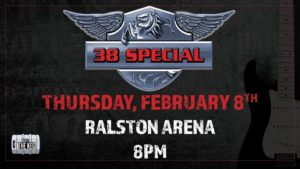 The biting cold was no match for the heated intensity of the fans who welcomed Autograph and .38 Special to the Ralston Arena in Omaha, Nebraska.  First up was Autograph.  Autograph has sustained a good fan base and even without former front-man Steve Plunkett, the fans remain.  Simon Daniels has taken over the lead vocal duties, Randy Rand provides bottom and Marc Wieland whacks the tubs and pies, and on lead guitar is Steve Lynch. (more about him later)  Autograph opened their set with Deep End off their Sign in Please album.  “‘I’m goin’ down on a sinkin’ boat I’m off the deep end, throw me a rope”. We’ve all been there before huh?  If you have read some of my other reviews for shows that took place in Omaha, you may recall that I’m not always polite when it comes to the fans, so with that said and as I’m shooting away at the band, I look behind me to check out the audience and I see that once again, 95% of them are sitting in their seats.  Immediately I started thinking, maybe Autograph should have opened with the title track from their newest album “Get Off Your Ass”. The reviews for this album are mixed to say the least, but with that said, there is some damn fine music on this LP.  The title track “Get Off Your Ass and “You Are Us We Are You” (which were both performed for us) will easily take you back to the height of the hair and glam days.  Dance All Night and Loud And Clear followed, then the aforementioned You Are Us We Are You off the newest album.  There was no attempt what-so-ever to try and disguise the fact that this song was straight up ROCK AND ROLL.  From Bad Boy to Send Her To Me we were treated to some big boy rock executed by some big league musicians.  Speaking of big league musicians You can’t write about Autograph and not mention that lead guitarist Steve Lynch, who is known as the “Two-Handed Guitarist” is an instructor for the Guitar Institute of Technology in L.A.  His trademarked two-handed (8-finger) shredding technique has been copied but never duplicated.  When you think of guitar tapping, I’m sure Eddie Van Halen comes to mind, but know this.  When Autograph was offered to be the opening act for Van Halen for their 1984 tour, Steve was told he could not use his two-handed shredding during their performance because it was “Eddie’s thing”. The real reason was because when it came to “tapping”, and as good as Eddie Van Halen was, he was no Steve Lynch.  It was at this point in the show where Steve proved it.  As formidable a guitar routine as you’ll ever be privileged to witness.  Simply put, PHENOMENAL! My Girlfriend followed, then the song they should have opened with Get Off Your Ass is offered.  By this point about 50% of the crowd were still seated.  We then were given Every Generation and She Never Looked That Good For Me (you might remember, if you are as old as I am, that this song was featured in the move “Like Father, Like Son” starring Dudley Moore and Kirk Cameron).  One more look at the throng and now 95% are on their feet. What on earth is it gonna take to get all these people on their feet.  Then it happened.  Thumpy, thumpy, thumpy…..Sign in Please, “Turn it Up.  YEAH!!! I’m working hard, you’re working too”.  Now everybody is up on their feet, from front row center to upper deck in the rear of the arena.  Turn Up The Radio was filling the venue.  It was as if I could hear the song, not just from the stage but from the sides, from behind and from above.  A KILLER, KILLER moment.  It took til the end of the set but Autograph never gave up on us and before it was over, we were Off Our Asses and on our feet applauding as Simon, Randy, Marc and Steve exited the stage.  Although I didn’t see it, I was later told by another photographer that all of them joined the masses and watched .38 special with the rest of us.  What a cool thing to do, from a super cool band.

Autograph Set List:
DEEP-END | DANCE ALL NIGHT | LOUD AND CLEAR | YOU ARE US WE ARE YOU | BAD BOY, BLONDS | ALL I’M GONNA TAKE | I LOST MY MIND | SEND HER TO ME | (GUITAR SOLO) | MY GIRLFRIEND | GET OFF YOUR ASS | EVERY GENERATION | SHE NEVER LOOKED THAT GOOD FOR ME | TURN UP THE RADIO

As the headliners hit the stage they immediately delved deep into their catalogue that spans thirty years.  The house had no problem getting on their feet this time, as founding member Don Barnes, along with Danny Chauncey, Bobby Capps, Gary “Madman” Moffatt and Barry Dunaway, collectively known as .38 Special opened with Rockin’ Into The Night”.  This is a fun song, which can be melodic at times, but still a top-notch opener. This was followed by Rough Housin’ and then my favorite .38 Special song Back Where You Belong.  That’s a dang fine opening trio of songs.  You can’t do this unless you have a catalogue of songs that allows you to balance out the entire set with the “hits”.  At this point you’d figure you’d hear a couple of thrown ins, but nope, Wild-Eyed Southern Boys is next along with Back To Paradise.  These guys are already tearing up the stage and the people are simply loving it.  If you’re a true fan of .38 Special you know they may be known as a Southern Rock band, but you also know that after their first two albums, they became a little more pop and leaned toward arena rock.  They were also MTV staples and their videos we featured repeatedly. They formed in 1974 and since then I have seen them twice.

Once for this shoot and review and once in 1981 in Frankfurt Germany at the 4th Golden Summer Night Festival.  What I remember about the 1981 version of .38 Special was there was a bottle or two of Jack Daniels in their hands during their entire show.  That didn’t happen this time but seeing them again sure did bring back some fond memories.  Oh, to be young and careless again.  But I digress. This night they made their way through a 22 song set list that kept everyone standing, singing and dancing.  Sound Of Your Voice to If I’d Been The One provided proof that these guys still love doing what they do.  They were extremely energetic and knew how to play to the crowd.  Within this group of songs Barnes gave us a couple of songs from his solo album Ride The Storm.  First was a Chicago cover of Feeling Stronger Every Day, then the title song, Ride The Storm. These played well, but not quite what the people wanted, so to bring us back on track we got You Keep Running Away which made it to number 7 on the charts. Fantasy Girl was next followed by Easy Beats cover Good Times and Trooper With An Attitude.   The band took a break and left drummer Gary Moffatt on stage to do some marvelous percussing.  When the band returned to end the main part of their set, they chose the song that symbolizes .38 Special.  Caught Up In You hammered the air with the sound of guitars and vocals (which is a southern rock must). I will admit to being guilty of forgetting just how many darn good songs this band has.  Of course, when they left the stage nobody believed for a second the show was over.  When they reappeared they presented us with Chain Lightning and Hold on Loosely.  As if that wasn’t enough were then all treated to a lively version of Traveling Band and when it was over, we knew that no matter how old these songs are, when done well and when done live, they still retain a beaming glow and radiance about them.  AND … Well, isn’t that .38 Special?

.38 Special Set List:
ROCKIN’ INTO THE NIGHT | ROUGH HOUSIN | BACK WHERE YOU BELONG | WILD-EYED BOYS | BACK TO PARADISE | SOUND OF YOUR VOICE | SOMEBODY LIKE YOU | HONKY TONK DANCER | TEACHER TEACHER | YOU KEEEP RUNNIN’ AWAY | SECOND CHANCE | LIKE NO OTHER NIGHT | FEELIN’ STRONGER EVERY DAY | RIDE THE STORM | IF I’D BEEN THE ONE | FANTASY GIRL | GOOD TIME TONIGHT | TROOPER WITH AN ATTITUDE | DRUM SOLO | CAUGHT UP IN YOU
[ENCORE]
CHAIN LIGHTING | HOLD ON LOOSELY | TRAVELIN’ BAND

One Percent and The Waiting Room Presented We Were Promised Jetpacks

BY DEAN BIRKHEIMER | Go Venue Magazine “The woods are lovely, dark, and deep. But I have promises to keep, and miles to go before I sleep.” – Robert Frost I was very eager to shoot […]

One Percent and The Waiting Room Lounge Presents .38 Special

BY DEAN BIRKHEIMER | Go Venue Magazine “’Cause the South’s gonna do it again and again..’ Charlie Daniels” Seems like every time One Percent Productions and The Waiting Room Lounge get together, something special happens. In this case […]