Come one come all it’s a rock n roll carnival show.  This was the feeling on the night of February 7th, 2018 at Saint Andrew’s Hall in Detroit, Michigan, Swedish band Avatar brought their Avatar Country tour into town and brought along the band The Brains and circus sideshow act Hellzapoppin.  The moment I walked into the venue I could tell it was going to a great night.  There were drawings of Avatar done by fans hanging up for all to see as you entered through the lobby.  And some staff members even dressed up for the occasion decked out in clothes that’d make a carnival barker proud.  The Avatar merch booth was quite an eyecatcher with workers also dressed in carnival barker garb as they tended to games like spin the wheel in which fans could play for a chance to win various prizes.

I was prepared for music but I wasn’t expecting a circus sideshow.  I wasn’t sure what to expect but once the show got underway, I and the crowd were in delight with what we witnessed.  Emcee, Bryce “The Govna” Graves got the crowd up to speed with what was about to happen and he himself did some wild things, like putting a drill down his nose and using a condom in the strangest way.

Graves introduced us to several performers, Short E. Dangerously, a half man who I’ve actually seen on television before, I was delighted when he came walking in on his hands and wowed the crowd with his strength and athleticism despite not have having legs.  And then he had us cringing as he walked on broken glass and even leapt from a ladder onto the broken glass just to further amuse us.  Short E. and Graves had some great dialogue with each other that had us laughing.

Ryan Stock was the next performer who had us grimacing as he swallowed swords, put a chainsaw in his mouth, hung cowbells and a bowling ball from his face and even played a rousing few rounds of the knife game as he upped the ante each time with a bigger knife, this done while wearing a chicken costume.  It had us in the crowd on edge but luckily tonight he didn’t stab himself.

Rounding out the shows performance was magician Dan Sperry, whose wicked mannerisms radiated throughout the room as he had the crowd in awe as he used dental floss against his neck to retrieve a mint lifesaver he chewed up and swallowed, ate razors only to bring them back out of his mouth with a string and made birds appear out of thin air.

This was one hell of an opening and we hadn’t even gotten to the music yet.  Hellzapoppin is an act to be witnessed, even if you’re disgusted, you’ll still have a good time.

The Brains got the music portion of the show kicked off in high gear with their psychobilly sound, this group out of Montreal, Canada knows how to rock.  Being a fan of Brian Setzer, this music was right up my alley, that thumping finger bass plucking by Colin the Dead was spot on.  Phil The Beast looked like a kid in a candy store sitting behind the drum kit as he pounding away with a smile.  Rene D La Muerte on guitar and lead vocals rocked the mic and his guitar with vigor.  The Brains were a hoot and definitely got the crowd jazzed up for what was to come. 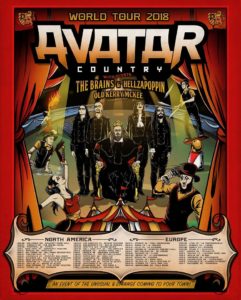 Avatar has been gaining much deserved attention over the past few years.  Having been around since 2001, they’ve certainly weathered through and persevered in the music business.  Their latest tour is in support of their recent album that was released in January this year by the same name of ‘Avatar Country’.  Somewhat of a concept album, it focuses on “The King” portrayed by guitarist Jonas Kungen Jarlsby, who entered onstage in his King attire where a throne was swiftly put in place for him to sit and even a step stool was placed for his left foot to raise his left leg to better hold the guitar in comfort as his fingers danced on the strings as bandmates John Alfredsson on drums, Tim Ohrstrom on guitar, Henrik Sandelin on bass and Johannes Eckerstrom on vocals entered onstage.

Eckerstrom is one of the best when it comes to front men, he has the presence and vocal chops that could lead legions into war and have them winning.  Which is what it felt like at times, especially on songs like “Hail The Apocalypse”.  The music that accompanies the vocals is so well executed you can’t help but not want to head bang and rock along.

And anybody who calls Barry White a poet, which is what Eckerstrom did, is alright in my book.  Playing a variety of songs from old stuff like “Bloody Angel”, “Paint Me Red” and “Swarm” to newer songs off the ‘Avatar Country’ album, Avatar has built a fine repertoire of tunes that can entertain the masses to much delight.

Even though Eckerstrom admitted he and the band was tired as the first leg of the tour was closing in to an end, they all performed and played their hearts out and it showed.  I would’ve never known they were tired, but to the credit of the fans, Eckerstrom told us we are the ones who give them the fuel to keep playing on.

This has been my fourth time in the last four years seeing Avatar, I was impressed the first time I saw them and I continue to be impressed if not amazed by this band.  Avatar is the real deal, get yourself out to see them and you too will find yourself fueling them to keep rocking on.

LIVE REVIEW: COMBICHRIST Performs at The Machine Shop on May 31, 2019

BY MIKE SHALER | Go Venue Magazine I have been looking forward to May 31st 2019 for a while now.  Combichrist was in town making a stop on their One Fire tour at The Machine […]