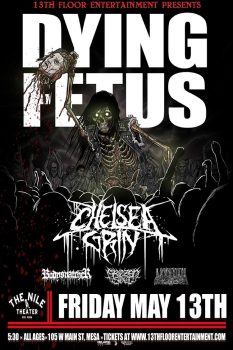 On Friday, May 13, 2022, adults of all ages packed in Mesa’s historic venue, Nile Theater, for a night of brutal metal. Making fans SCREAM this time – Undeath, Frozen Soul, Bodysnatcher, Chelsea Grin and Dying Fetus and Go Venue was there to cover it!

Dying Fetus, a Death Metal band originally from Marlboro, Maryland, was the headliner for the night and brought out a crowd of metal heads that may have varied in age, but all held the same love for the scene. Dying Fetus, formed in 1991, may be a three-piece band, made up of founder/vocals and guitarist John Gallagher with bassist Sean Beasley and Trey Williams on drums, but they have the heavy sound of a larger group. Playing heavy track after heavy track, their powerful energy radiated throughout the venue and deep and slamming breakdowns had everyone going nuts. It was clear to see why they are, and have been, one of the most influential and respected bands in the metal scene. Their set was overwhelmingly amazing and this whole night.

The remaining tour dates can be found here.

CONCERT REVIEW: BEARTOOTH Chews Up the Sold Out Van Buren

JESS BECK | Go Venue Magazine It’s always interesting to shoot shows in other cities that you aren’t super familiar with. Having relocated to the Phoenix Metro roughly 5 weeks ago, I wasn’t sure what […]

BY JESS BECK | Go Venue Magazine With impending weather on the horizon, some folks were iffy on whether we would get drenched here in the desert during the show. Emergency ponchos were ready as Phoenix is […]

Panic! At the Disco Stomps the Footprint Center

BY JESS BECK | Go Venue Magazine To say that this was a unique experience would be one hell of an understatement. I first became aware of Panic! At the Disco in 2005 when I had graduated from high […]