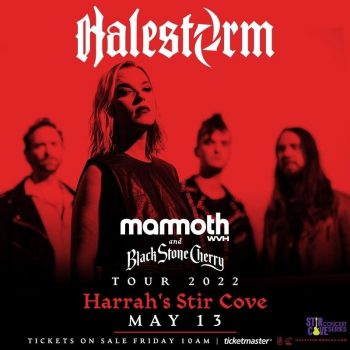 On May 13, Stir Cove at Harrah’s Casino in Council Bluffs, Iowa kicked off their summer concert season by bringing in Halestorm, Mammoth WVH, and Black Stone Cherry. I could’ve not thought of a better line-up to kick off this summer of concerts.

Black Stone Cherry from Kentucky kicked the night off. These southern rockers know how to get a party started. Led by lead singer and guitarist Chris Robertson, this band created such a feel-good vibe unlike any other. I’ve never seen a band jump around the stage so hard like Black Stone Cherry. The crowd seem to enjoy it very much. They are a very talented band, very tight and groovy. It was a solid outing by Black Stone Cherry.

Mammoth WVH from Los Angeles was the direct support of the night. This was my second time seeing them in almost seven months, so I was excited they get to play this size of venue, let alone opening up for one of the biggest modern hard rock bands currently. It was nice to finally see guitarist Frank Sidoris play with them, who had to miss their last tour due to being hospitalized from a car accident. This was also my first time seeing them play since they were nominated for their first Grammy for “Distance”, a much-deserved recognition. The band still remains to create something new and unique. I am always impressed by Wolfgang Van Halen’s talent on the microphone, guitar, and even piano. I do hope they play a headlining show in Omaha. I also look forward to hearing new music from them soon.

Finally, Pennsylvania’s own Halestorm closed out the night. There is a reason why this was my sixth time seeing them live, and it’s because they are seriously one of the greatest live bands of all time. I am always amazed by the prowess and energy they put onstage. Every note lead singer Lzzy Hale sings out is incredible. The whole band is incredible. Now, they have a new album that came out last week called, Back from the Dead. They played six songs off their new record, including singles such as “Back From the Dead” and “The Steeple”. Arejay Hale’s drum solo continues to be a show stopper, always making drum solos cool. I have always enjoyed Halestorm’s chemistry onstage since I first saw them back in 2012. I am excited about where Halestorm is going next with their success of longevity. It seems like they get bigger and better every album cycle. It is always a welcoming surprise every time they roll into town.

PHOTOS BY JOE DeSANTI | Go Venue Magazine Here’s the sneak peek of Collective Soul and Gin Blossoms that were touring in the 1990s came to the Stir Cove Summer Concert Series, an outdoor concert […]

WORDS BY DAVID TAYLOR AND PHOTOS BY ROBERT A CHADWICK | Go Venue Magazine Thursday, June 13 was a perfect night to go to an outdoor concert in Council Bluffs. The weather was perfect, not […]