Combichrist and KING 810 have announced U.S. tour dates that begin on April 3rd in Winter Park, Fl at Soundbar and conclude on April 26th in Atlanta, GA at The Masquerade. (dates below)

Initially cutting his teeth in the seminal Norwegian hardcore bands My Right Choice (later re-named Fleshfire) and European hardcore legends; Lash Out, LaPlegua segued into the electronic music world with Icon of Coil. Originally a solo project, it morphed into a full band. Not only did IOC mark LaPlegua’s first major work with electronics and dance beats, but it also granted him wider exposure beyond Norway; IOC was LaPlegua’s first project to be released in the United States.It wasn’t until 2003 that LaPlegua founded Combichrist -the project that would soon dominate his time. A departure from IOC’s softer electronic sound, Combichrist took LaPlegua’s hardcore past and electronica present and merged them into a singular, mechanical monster. Without the compromise of the band dynamic, LaPlegua, who does everything in the studio himself on Combichrist releases, was able to explore whatever avenue he desired musically. What he found was a long dark road with plenty of twists and turns. The Joy of Gunz, LaPlegua’s first release as Combichrist, was quickly followed by two EP’s: 2004’s Kiss the Blade and Sex Drogen und Industrial. In 2005, LaPlegua was back at it again, releasing the landmark album Everybody Hates You. Defying the dreaded sophomore slump, the second Combichrist full-length featured two tracks that would become club classics “This Shit Will Fuck You Up” and “This Is My Rifle” and was also the project’s U.S. debut on Metropolis Records. Further benchmarks were set with the release of the 2006 EP Get Your Body Beat, the title track of which landed Combichrist its first appearance on Billboard’s Top 10 Dance Singles chart.

The years that followed brought on 6 more full-length albums —What the Fuck Is Wrong with You People? (2007), Today We Are All Demons (2009), Making Monsters (2010), No Redemption (Official DmC: Devil May Cry Soundtrack)(2013), We Love You (2014), This Is Where Death Begins (2016) -as well as a handful of additional EPs. On top of Combichrist’s many releases, LaPlegua has also logged countless miles, globetrotting on tours of Europe, South America, Australia, the United States, and four full months in Europe and North America touring with Rammstein (in front of hundreds of thousands of people).Combichrist is ready to dominate 2020 with massive touring in support of the new album One Fire, released in June of 2019.

“UNDERSTAND” from –One Fire: https://www.youtube.com/watch?v=S-TvCNMlND0

“MY LIFE MY RULES” from –This Is Where Death Begins: https://www.youtube.com/watch?v=0tEUP7vDMbo 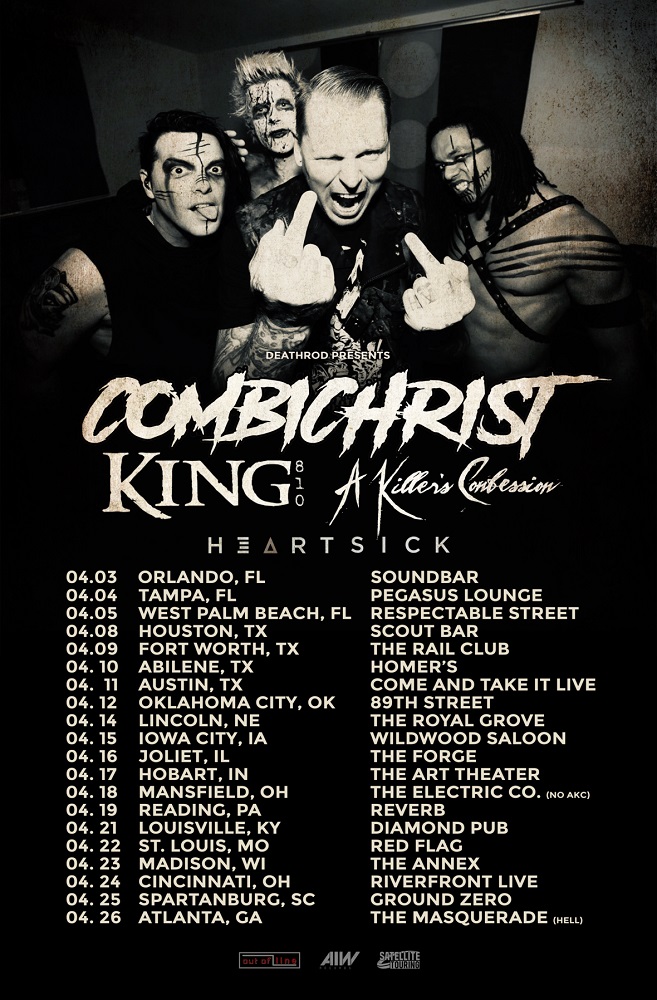 Come one, come all you freaks and aggrotechies, June 1st at The Machine Shop hosted Combichrist, Wednesday 13, Night Club, Prison and Death Valley High as the Everybody Still Hates You tour rolled through Flint, […]

COMBICHRIST Kicks Off "Everybody Still Hates You" Tour Next Friday, May 18

As announced, electro-industrial leaders COMBICHRIST will head out on their upcoming headline tour, dubbed the “Everybody Still Hates You” tour, next Friday, May 18 in Pomona, CA! At each tour stop, the show will feature […]

MIKE SHALER | Go Venue Magazine The first thing after hearing several of CyberScream’s songs was, this stuff rocks and rocks hard.  This is the kind of music that gets you pumped, excellent gym music […]