After unleashing their macabre punk earworm “A Night To Dismember” around Halloween, the band is ringing in the new season horror-style with a swinging new anthem, “Hands Of The Ripper”. The bite-sized bop – accompanied by a gritty new music video featuring retro horror film scenes – mixes horror punk elements with rock attitude, soaked in murderous metallic energy!

Frontman/multi-instrumentalist Anders Manga says about the track:
“It’s one of those songs that appeared when I wasn’t trying to write a song. I was just sitting at the drums playing a shuffle beat when the verse melody just popped in my head and I thought, ‘wait this is pretty good’. I immediately started working on it and had it done in a day or two. As a horror rock band, perhaps it’s obligatory to have a Jack the Ripper themed song? I don’t know, these things just happen. We hope somewhere Screaming Lord Sutch is digging it.”

Watch the grim official music video for “Hands Of The Ripper” below:

At the start of 2020, Anders Manga was about to head out on tour for his darkwave side-project when COVID-19 hit. Soon locked in their house under local stay-at-home orders, Manga and his bride and bandmate, Devallia, spent time jamming in their basement and revisiting some of their classic punk favorites. Holed up and barred from the uncertainty of the world, BLOODY HAMMERS conjured 11 new raw-power tracks inspired by that sound, and now they’re unearthed… from the grave!

While Songs of Unspeakable Terror doesn’t stray too dangerously far from the sound listeners have grown to infectiously adore, the full-length explores yet uncharted territory: retro-sized horror punk in all its gritty glory. This beastly record shouldn’t be confused as an all-new direction for the band – these songs are a temporary foray into the unknown while still remaining true to the BLOODY HAMMERS sonic trademark.

Kicking off with the first single and album opener “A Night To Dismember”, the album careens the listener down a dark, winding auditory road of melodic punk (in a jet-black classic car, of course). Trudging, metallic terrors like “Hands Of The Ripper” and “Witchfinder General” ensnare the listener, while seductive, unrelentingly heavy tracks such as “Not Of This Earth” will have them screaming for more, and head-bobbers like “The Ones Who Own The Dark” prove this offering isn’t short on melody. Laced with spine-tingling vocal lines, bathed in an occult cocktail of granular guitars and accented by a peppering of vintage Mellotron, each track on Songs Of Unspeakable Terror is a bonafide horror punk pillar. 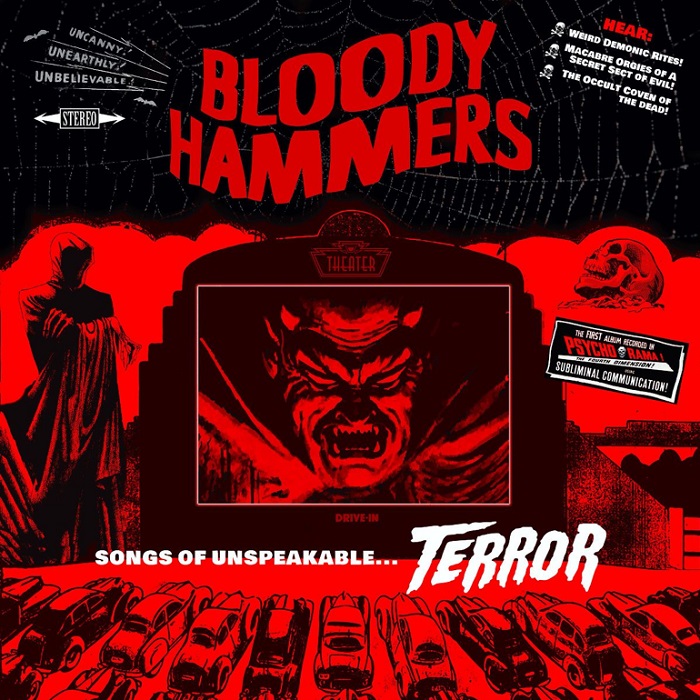 Fans of BLOODY HAMMERS and heavy music fans new to the band alike will enjoy this unique offering, available in a digital, CD jewel case, and multiple vinyl variations!

Moldovan progressive modern metal unit INFECTED RAIN are firing on all cylinders after the release of their new album, Ecdysis, which just dropped on January 7, 2022, via Napalm Records. On the strength of the new record, […]

For the better part of the past five years, top-charting masked metal machine MUSHROOMHEAD have been crafting the epic follow up to their monumental 2014 full-length album, The Righteous & The Butterfly – waiting ever-so-patiently to drop their next […]

Through their unique and heavy sound, over the top live performances and the mesmerizing voice of singer supreme Tatiana, Ukraine based band JINJER have quickly become one the most talked about names in the heavy […]