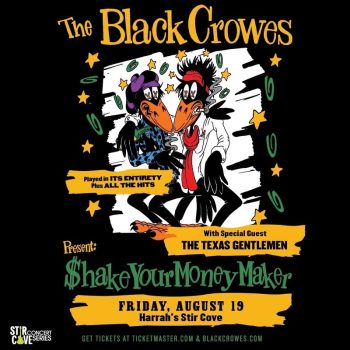 Friday, August 19 marked the return of The Black Crowes to the Stir Cove stage. I was surprised when I got there by the large number of lawn chairs that were situated since there was an opener, but once The Black Crowes took the stage, it was game time for the crowd to crowd towards the front, so they were pretty excited for them to come back to town.

The Texas Gentlemen were the openers for the evening. This Dallas quartet reeked of musicianship, always playing off each other. They are an amalgamation of rock, country, funk, and soul. If you heard it in the seventies, they are bringing it to the forefront today. They were as if the Allman Brothers Band and Steely Dan had a love child. I was very impressed by Daniel Creamer’s soulful keyboard playing, bringing in some interesting sounds to the band. Also, I love a slide guitar, so thank you guitarist Nik Lee for that. They played quite a bit of new material that is on their forthcoming untitled record, produced by non-other than Chris Robinson of the Black Crowes. Very excited about that release and an awesome opening to the concert.

The Black Crowes from Georgia brought the church of rock n’ roll to the Stir stage. They played their debut album, Shake Your Money Maker, in full, front to back. I loved the production they brought with them, lighting and all, including a bar with a bartender, who looked like he was having the best time back there. Lead singer Chris Robinson still sounds as good as he did in 1990 and loves to move around the stage. I was also happy to see they brought along a couple of backup singers, bringing in some extra flavor to the music. The dueling guitars between Rich Robinson and Isaiah Mitchell were quite electric, just bouncing off each other. I’ve seen a crowd moving and shaking to the music that much before. I hope they record an album of original material in the near future because they bring such kinetic energy to the live stage. Overall, great night for live rock n’ roll music!

I Prevail Wows The Crowd With Good Noisy Show in Omaha

REVIEW BY DAVID TAYLOR AND PHOTOS BY PAM WHISENHUNT | Go Venue Magazine Saturday, September 17, marked the return of one of metro Omaha’s favorite bands, I Prevail. This band was headlining Sokol Underground in 2016 […]

JESS BECK | Go Venue Magazine What do you get when you stuff 300 humans into a basement with 4 bands and minimal air conditioning? One of the most exciting shows I’ve had the opportunity […]

BY DEAN BIRKHEIMER | Go Venue Magazine “A naked woman in heels is a beautiful thing. A naked man in shoes looks like a fool.” – Christian Louboutin As I approached Stir Cove, and before […]