LAW release their new album “There and Back Again” on November 23, 2018 on Haulix.

Born out of Long Beach California, LAW have been together since 2013 and have an existing EP “Toxic” that has been followed by this 13 track expedition of an album.  Alongside being very good value for money, the album represents a commitment to the creative aspect of making music.  The album disposes the routine and commercial format that sweeps across artistry and defines what it should be, rather than what it just is.

The prominent drivers throughout the album are the transitions. With a 60´s, 70´s, 80’s, 90’s, 00’s and into the `teens`exploration of rock flavors throughout this rock-indie-ska fusion that LAW have purposefully placed as a late 2018 release.  A heavy relationship to ‘GenY’, offers an influence that is fitting and well synched with present moves in the genre.  It would be too easy to claim a rock album, the material and content are in line and in tune with present generational stances on here it is.

At first, it is fair to say that as I toiled and struggled with the album, the clarity emerged when I understood that it was not created for me perhaps, and with no apology to the rock that was before. This has been done for the band by the band whilst using some of the techniques that are familiar and historically obvious.  This is why and how I was able to “get it” and an wide audience base will too. 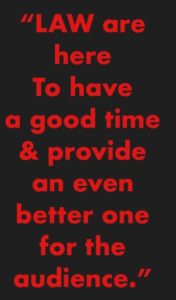 LAW are here to have a good time and provide an even better one for the audience, it is light and fun and in places poignant and cutting in others. “Autumn Lights” for instance, is funky, cool at the intro, yet playful and provoking. There are smoother and more sensual tracks.  Wry and witty references to their generation that add cynicism and contemporary cultural references to align with the listener.  This needs some thought in future releases, the gimmick will shift and dynamics will change as the cultural economy moves and it will be important for the band to keep up with whilst not becoming uncool.

The 2016 EP release “Toxic” was much more painting by numbers whilst “There and Back Again” is abstract and fragmented to elicit key skills and drive the development forwards.  The listener is witness to growth and development in this album, this is a band showing the working out down the side of the page and by the end of the album are ‘back again’ with a more rounded repertoire of techniques.

Style, Technical Capacities and Analysis
The guitar sound replicates an old school Marshall overtone of a JCM800, enough without too much that provides an honesty to the pitch and stylistic ability, for certain there are effects but the reliance is upon what the pickups and mic´s were designed to capture and sound like and this is adds a credibility to the output.  The sound is on the cleaner side of distorted to allow the vocal to sit on top.  The riff and scale usage is reasonable and yet an added complexity and full use of the fret board could have added more in the spaces when considering the variety of decades covered. In places, the guitar can be an uncertain leader but the earnest openness of electric notes on wood through a pick-up have been highlighted well.

Drums are delivered with diversity, the open hi-hat that creates expression and carries the flow.  The triplets in the patterns on “Doom” and “Cold” are almost invisible within the track but are significant and important to any outdoor venue.  The tom, snare and bass drum work, uses a heavier recorded compound static line with little reverb.  All this adds and has either just worked ,or has been delicately placed.

The Bass in places shows high point moments, there are simple finger taps as note to chord progression, slap accents and in some tracks pounding riffs. It could be pushed that there are too many elements, but the guitar is lead on the instrumentation and this allows bass to take the focus or drop back and machine forwards as an engine.

The vocal has an indie sound, relaxed and apathetic whilst responding to the nuance of the lyrical phrasing.  There is a Mac Demarco style dismissiveness that is both warming and shows the age of the material. There are periods where the vocal is drowned by the instrumentation although in the later tracks, the vocal is much more comfortable and secure, able and convincing. 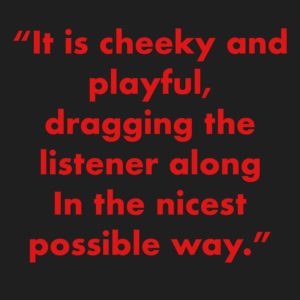 “Pause”; the stand out track on the album, with an early Arctic Monkeys or Last of the Shadow Puppets vibe. The track is rooted in indie-land with a smooth groove, the hand on hip bones moment, intimate and passionate. The track lures you in with the promise of dark fairytales. It is cheeky and playful, dragging the listener along in the nicest possible way.

It teases and lures the listener in. Hesitating yet firm to touch. The ska tones are clear whilst there is a desert-vibe of back-arching rhythm.  In the more tender and happier moments of the track the audience are convinced to stay, with the hope of being pulled into the fairytale darkness once again.  Push and pull, cheeky, sexy… inviting the listener to play along whilst smiling. Enchanted.

“Logun`s Run” A solid track, showcasing the vocal, the stability of range is in evidence throughout the verse to chorus. This is the crowd pleaser and the one to chant to at the festival.

Cold – The pre-single release with Game of Thrones thematic video just gets better and better and at around the halfway point. The basslines are hard and pound whilst the guitar solo takes you to where dreams are made and reminds me of moonlandings and stars. Watch the video here:

Aidan´s Song – Strong vocal. Confident. Would love to hear this live. Firm and masculine. The guitar from 2.45 is in a way full of sorrow, almost like it complaining to be used. The finish reinforces his feelings and the construction of the track plays to the individual strengths as part of a band and not in isolation.  Smart stuff.

Production Notes
The production technique has retained the natural feel of the instrumentation.  Balance is ‘live fed’, there is a sense of a live band recording or rehearsal room vibe. This has been skilfully pulled together by Eagles of Death Metal guitarist Dave Catching. This experience shows in the stylistics, it is audibly relevant and smooth. There are also one of two moments of Dave´s influence on some tracks that are worth listening for.

The recording process clearly aimed to catch the band as they take flight and lift off and this has worked well as the band emerge just as they were built from track seven forwards.

Overall and Outcome
This is an album for today´s generation and applies nuance across the decades to showcase the talent to shift in and out of rock interpretations.  “There and Back Again” does exactly that, shifts through time and gives a gestured reminiscence and wink to moods and techniques.  As a concept, there is versatility and in future releases, LAW could focus on their own style development now that the showcase is complete.  Working out where a band situates themselves amongst the genre comes down to keying into the unique elements they have.  LAW have a range of talents and now techniques to choose from and this album creates scope and capacity to elevate throughout 2019. The album title is a hint towards the Lord of the Rings and the relevance of the importance of the journey and what is learned along the way, and as the album closes, the ring is thrown into Mount Doom and the fellowship of LAW stands united. The LAW website features their upcoming live outputs and it will be interesting to see if the album can persist into next years festival circuit and develop the audience base further.

The album is a “coming of age” journey for LAW and needs more than one listen to fully understand the process undertaken by the band, elements of their personal histories are woven into the fabric of time and the next album could be where LAW stand on their own with a unique perspective in the dynasty that is rock.  “There and Back Again” is available through all major online outlets and is well worth a listen!

Dirty Sound Magnet Live at The Live Rooms in UK

Saturday, October 7, 2017 – Once again, I find myself in an extreme state of anxiety and anticipation as Danny Wimmer Presents smashes our faces with explosive energy from some of today’s most sought-after artists. […]

Riot Fest single-day lineups have been announced and Danzig returns to Riot Fest. Single-day and two-day tickets ON SALE FRIDAY at 10am CDT. And make sure to keep an eye out, the final two full-album […]