It’s a two-man army stomping across the music world with the strength of a bullet caught in the impenetrable chest of Superman. When you feel yours eyes are deceiving your optic comprehension, you hope your ears aren’t failing you, in what this is before you in the debut album “Saline,” by The Dose. 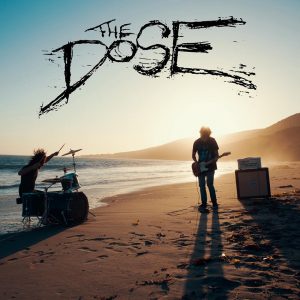 Stunning and heavily influenced by the gripping 1990’s garage grunge explosion, this Los Angeles-based band, releases their signature ass-kicking album today, and you can hear those inspirations of Nirvana, Silverchair, a hint of LIVE, with a completely different spin as only two musicians are circulating that brazen music. And it should be heard around the globe.

Coming off a recent ten-week European tour with Good Charlotte, it appears as if their music may be rotating with that gravitational pull of a possible promotional tour, merging hints of music from the past with today’s modern desire for real rock, steering clear of pop and anything that resembles the resurgence of boy bands.

Confirming that yes, this is just two of them pouring out that incredible sound in all original material, the two members of the band The Dose did what any real band does when things appear to be falling off its’ axis – they improvised. When their bass player didn’t show up to a performance one night, they didn’t just go on with the show, they went to work, acquiring the knowledge and adapting their skills to lay proof on the planet that they didn’t need anyone else on the stage to produce a quality product of marked entertainment.

How are they possibly achieving victory in this daunting battle of competitive musical play with only two performers? It’s a case of two talented switch hitters who, on the one hand you have Indio Downey, bold in his lyrics and tempered in his vocals, as he brands the guitar like a weapon, then Ralph Alexander refuses to be upstaged and uses his foot bass pedals to carry the beat like a boss as he imposes his drumming authority like a machine built in this century.

“Every drummer studies Neil (Peart), but I was always watching Geddy,” Alexander said of Rush. “I researched and found out what pedals he was using and acquired the same Moog Tauras bass pedals he used on Tom Sawyer. The band wouldn’t exist without him. Who would have thought that a grunge duo would have Rush influences? Our band is a modern tack on old school vibes.”

Impressive in their ability to make that kind of sound come blasting through your bluetooth, these two guys don’t let you down. It’s a lot of work and effort going into what they are truly accomplishing here. It’s easy to take for granted your local bar hop live music acts or the newest thing marketed to death by giant labels, but to appreciate the honest attempts at what these two are doing means you really love music. And they are conquering this challenge with their own in-house record label and a team, they insist, working behind the scenes, that helps them get it all done.

Busting into a field of 12 songs in their debut album, they gear up hard to bring us “Vervain,” with a kickass drum solo kicking it off and one of those steele-bending electric guitar sounds that screams loud enough it may have awaken Kurt Cobain from his grave.

In the song “Drown” that tempo is constructed with skill and the haunting vocals seem to bleed through paper as it seeps past your eardrums and almost into your unconscious mind. I honestly drowned in the sound.

24-year-old Downey, who has been playing guitar since he was 12, described this creative musical outlet as a source of healing and surviving, while at the same time, he embraces the comedic side to a life in entertainment.

“I think, to be honest, this album was written about perseverance and in the face of opposition to that spiritual growth,” Downey said. “I wrote all the lyrics in a time when I was sober and coming from a place of trying to stay positive during a time that was kind of hard for me.

“The Thrill of It” is probably my favorite,” he said. “It’s ‘this too shall pass’ themes and when it gets to the bridge, it gets more quirky and we’ll definitely do more of that in the future. I like when music gets silly.”

“Thrill Of It” slams into place and it’s familiar, but new and not being pieced together by four or five guys here. Just blows my mind how massive their talent truly is. There’s a punk feel that has attached a contagious pathogen into the souls of these two musicians and it’s displayed in historical tribute to the 1980s, 90s and pounding it’s way through into 2019 just beating down the bullshit of manufactured crap generated on a computer.

You just don’t hear or see that unless you’re walking past multi-talented one person street performers on the streets of Memphis, or Charleston, South Carolina, any musically gifted city where they go unnoticed, except for those who truly appreciate their art. Anybody who can play multiple instruments at the same, stay in time, and at the same time, is keeping control as the backbone to the lead singer who is heralding out vocals that soaks into your skin and moves your bones to the beat is undoubtedly, mesmerizingly gifted.

“I’m really excited for fans to hear certain dimensions of our band because as far as I know, we’re the only band that can keep a full rhythm section going during solos and explore our instruments at the same time,” Downey said.

“Despairadise” has a Smashing Pumpkins feel to it and it’s a throwback but with a modern day upgrade. Influence is strong and occurs with a lot of musicians who play favor to their preferred musical tastes but when you can take your talent and stand it up to honor them, in a way that also distinguishes your music, it’s a golden triumph and these two guys do that on this album.

They’re bringing back those seasoned sounds like an Oasis vibe in “Saline” but flipping it and should be making moves up the charts to the masses because their strength is that they appear familiar in their garage days and alternative influences, although they don’t sound like anybody producing music in this decade.

Alexander, who, at the age of 29, plays by ear and reads music, said they are crossing their fingers for a tour to present this album and although he confesses, he can’t choose between his favorites among them, he does lean towards “Meant To Be” and “Verbain” and hopes the feedback they get from fans leads to acquiring new faces in the crowds to display all that went into producing this impactful and substantial band, that has become The Dose since 2015.

Downey said when they both decided they were going to be a two player band, they did a vote on social media to name the band. “Ralph and I had submitted ideas and we had some friends of ours put in names and they voted. The Dose was the one everybody liked the most.

“It worked out really,” Downey said. “It’s a double entendre, Dose. It means two, it’s a dosage and it makes sense with a rock ‘n roll band.”

Alexander added that things have a way of coming together and these two hope to bring their shared experience in creating this album to people who can appreciate what they put into it.

“We had a blast on the Good Charlotte tour,” Alexander said. “We hope to do another one in support of this album as well.”

When you are nearly matching the multi-instrumental natural skills of Geddy, the music world should take notice. And I wasn’t going to mention it, but since, if you google The Dose, you’ll find out anyway, yes, this is the son of Ironman’s Robert Downey Junior, a brilliant acting talent, but his son isn’t resting on his father’s laurels, because this Downey has his own formidable talent and he’s found a partner in crime that can battle their way up the charts together if people just give them the chance to appreciate what is absolutely magnificent art. This album needs to be flying off shelves into a speaker near you.

And we hope to see them out on the road soon to play at live venues and festivals across the world.