The Duke of Spook and his devilish ghouls, WEDNESDAY 13, will return to the road later this year for their headlining “NEAR DARK TOUR,” with special guests THE HAXANS, in support of their recently released album, “Neccrophaze,” that’s out now from Nuclear Blast. Tickets go on sale today, April 17th. Visit https://officialwednesday13.com/ for more information.

“After two years of doing support slots around the world, the Wednesday 13 “NEAR DARK” Headline Tour is finally here! We are SO excited to get back to our headline shows and deliver the most theatrical Wednesday 13 show you’ve ever seen. More spook, more puke, more bang for your fangs….see ya in the Graveyard at Midnight.” ~ Wednesday 13

WEDNESDAY 13 will be joined on the tour by LA based goth-pop duo THE HAXANS. whose sound is best described as the psycho-saccharine music of a fiendish creep’s fever dream…Classic art-house cinema, b-movie horror, spooky decadence, vintage American myth, and black roses dripping with blood all tossed into a cauldron, like so many ingredients from a well-worn book of spells. THE HAXANS are Ashley Costello, sub cultural style icon and leader of Warped Tour screamo stars NEW YEARS DAY, and Matt Montgomery, better known by his alias Piggy D., bassist for over a decade with multi-platinum shock rocker ROB ZOMBIE, guitarist with WEDNESDAY 13, and sometime visual and musical collaborator with rock icon ALICE COOPER. This will be the band’s first ever tour. Tour opener will be DEAD GIRL’S ACADEMY.

In case it was missed, WEDNESDAY 13 recently released a new lyric video for their newest single, “The Hearse,” from “Necrophaze.” Described by the band’s iconic frontman Wednesday 13 as “the heaviest track on the record, and maybe the heaviest track of my musical career,” “The Hearse” is goth-rock bliss that tantalizes listeners from beyond the grave. Watch the lyric video below:

Additionally, in response to the COVID-19 pandemic, WEDNESDAY 13 has launched the NECROPHAZERZ FAN KLUB to interact directly with fans during this time of quarantine and social distancing. Join now at https://bit.ly/2K1aywb.

Heavily influenced by real life night terror occurrences of Wednesday himself, historical serial killers, and a slew of 80’s horror films, the ideas behind “Necrophaze” are bizarrely familiar, frightening, and a hell of a lot of fun. Being a collector of both media and toys, WEDNESDAY 13 was inspired by a craving for variety to create dual album artwork for this release (seen below). The covers showcase either end of the horror spectrum with a “Creepshow” comic book vibe for the LP artwork, and the eeriness of something akin to John Carpenter’s “The Fog” adorning the CD.

“Necrophaze” was recorded and mastered with Michael Spreitzer, producer, recording engineer, as well as the long time guitarist of DEVILDRIVER, and is the first WEDNESDAY 13 record to feature guest spots, which include performances by Alice Cooper, Roy Mayorga of STONE SOUR (who provides an eerie, authentic, 80s inspired synth soundtrack-score to the album), Alexi Laiho of CHILDREN OF BODOM, and Cristina Scabbia of LACUNA COIL. Also making an appearance on the album is Jeff Clayton: member of legendary punk bands ANTiSEEN & GG Allin’s MURDER JUNKIES. 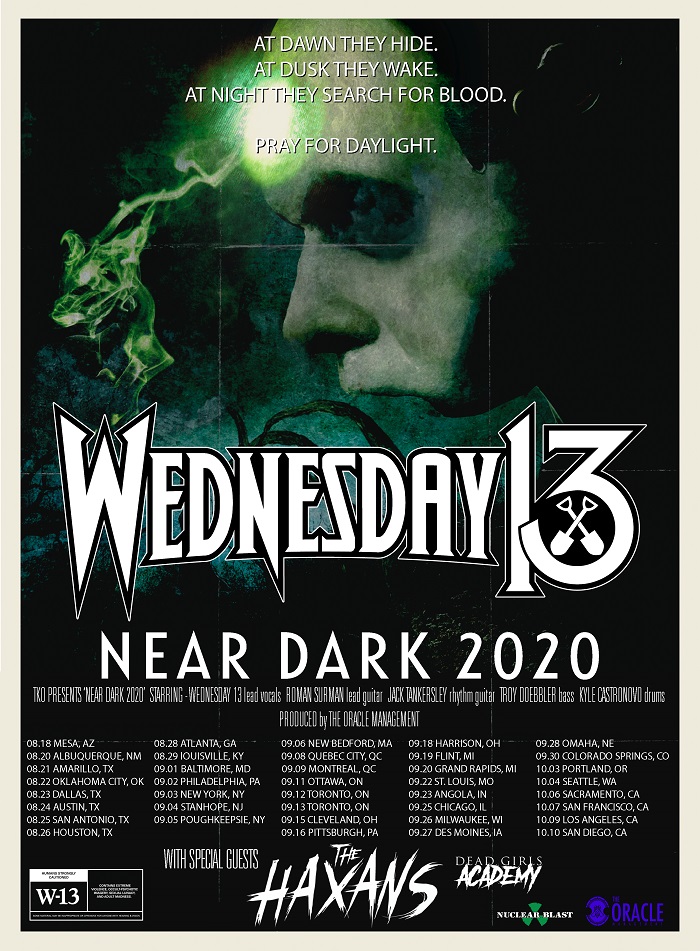