“Music evokes so many feelings in us, memories, nostalgia, things that are connected to our past” – Olga Kurylenko

Full disclosure: Due to a communication error, I was not allowed to photograph or stay for the Violent Femmes part of the show. Band management was not made aware of my approval to cover the event and I was asked to take my equipment back to my car. As there was no re-entry once a person left, I had no choice but to leave the show early. 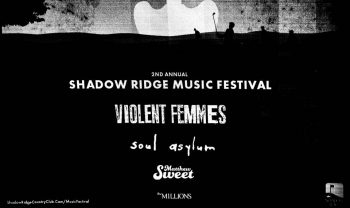 This may have been only the 2nd year of the Shadow Ridge Music Festival, but you get the feeling they’ve been doing this for quite a while. For those of you who don’t know, Shadow Ridge is a country club that features an incredibly landscaped golf course.  The show was held in their parking lot and parking was made available at a nearby high school with continuous shuttle service. The stage was very large and raised and was bordered by speakers and lighting. The first forty rows or so were seating, and then beyond that was general admission.

The show kicked off right on time and the first band to take the stage was Lincoln’s own, The Millions.  The Millions feature Lori Allison on vocals, Harry Dingman III on guitar, Marty Amsler on bass and Greg Hill on drums.  The band has been around since 1989 and became a local sensation by pretty much playing nonstop at all the local establishments. They have a dreamy sound about them that seems to soar above you. You just want to reach up and pull the music down to you. The guitar work is an important component of their sound. It’s unique in its approach and at times can be downright nasty. According to their Facebook page, in October of 91, their song “Sometimes” was picked up by college and radio stations that month and was out done only by U2’s “The Fly“.  They were also featured as a “New Face” in Rolling Stone Magazine. This band was on the cusp of stardom, but in 1995 they disbanded.  Lucky for us they reunited in 2012 and have actually released an album titled “Poison Fish”.  Although recorded in 1990 it stands the test of time and is always part of my playlist.  Tonight they came out swinging, despite the bright sunshine in Loris face, she sang her heart out. They sounded so young.  I swear I felt like I was back at Duffy’s Tavern in 1990 again. They left us with “Sometimes” which of course is their signature song. If you haven’t heard it you really should give it a listen. Here I’ll make it easy for ya.

Next up was Matthew Sweet. Matthew is also a Lincoln, Ne native who gained world-wide recognition due mainly to his 3rd album “Girlfriend” the title track was number 5 on modern rock charts and for about a 5 year span Matthew was a dominant force in the alternative rock scene.  Matthew due to some sort of accident was restricted to sitting in a chair while performing. It didn’t matter, the man can play and the man can sing. He sounded great.  His last 3 songs were “Girlfriend”, “I’ve Been Waiting” and “Sick of Myself”. Yeah, an incredible trio of songs.  My favorite songs are “We’re the Same” and” Divine Intervention” and he played them as well.  Matthew plays the Omaha / Lincoln area often and if you haven’t seen him, you really should and if you have seen him, you really should see him again. After-all like I said to him before the show.  It’s Matthew FXXKin’ Sweet!!

Now onto the last band I was able to see.  Soul Asylum.  This band had one of the biggest hits of the 90’s in” Runaway Train”. Unfortunately I was gone before they got to it. I can only imagine the crowd went insane when the played it.  The band came out full of energy and for the entire time I was there, they never let up. By now the venue was nearly packed. At least in the sitting area, in the general admission area it was shoulder to shoulder and everyone was simply having a great time.  Soul Asylum is one of those bands that you just can’t help enjoy. They boost up the atmosphere and everyone is mesmerized by their performance.  It had become a full on 18 song set list party.  I sure hope they come back again real soon as I would love to hear their entire set.