“When punk rock happened, it created an opening in the culture… it made it OK to think you could play music, even though you had no musical training.” – Kim Gordon. 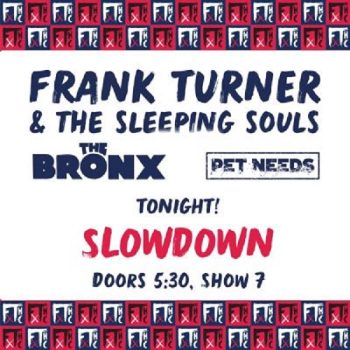 Ah, The Slowdown.  How I’ve missed you. It’s been a long time since shooting there, but when you’re hosting Frank Turner and the Sleeping Souls, you know nothing was going to keep me away. On July 13th, 2022 Frank and the boys stepped on stage for show number 2,664. They are in the middle of their 50 states in 50 days tour, and Nebraska was state number 37. Before the show started, my wife and I grabbed a table. My wife noticed a guy with a cane looking for a seat as well. My wife being the kind soul that she is offered to share our table. The guy was with his wife and another couple. Before the show had ended, we had made four new friends. Jeremiah, Gwyneth, Ben and Angie. As fate would have it, we met another couple, Kyle and Erin, whom we spoke with after the show until we were politely asked to leave by the venue’s management. My wife and I are in our 60s, and it’s been years since we closed a bar. So actually, six new friends. This is typical of a Frank Turner show. It’s always a welcoming and friendly atmosphere.

I really do love The Slowdown, but I do have one favor to ask. Please consider moving the barricade another foot from the stage. Us photographers don’t need a lot of room, but some room would be appreciated. As I squeezed my way into the photo pit, I noticed the crowd was already a good size and very eager for the show to start. Pet Needs ran on out and immediately began to show that they belonged on that stage. For their entire (way too short of a set) they owned the venue and no other band on this planet was going to take it from them. Pet Needs and Frank Turner do have history. It was Frank who produced their first album “Fractured Party Music” and who has helped mentor the band. The band is Johnny Mariott on vocals, his brother George on guitar, Rich Gutierrez handles rhythm and Jack Lock on drums. When you see Pet Needs perform, you know you’re getting genuine rock and an absolute appreciation of being on the stage to begin with. They are extraordinarily grateful to be able to perform for people and take none of it for granted. If ever a band fit the, be on the look-out moniker, it has to be Pet Needs. In September, be watchful for their newest Xtra Mile Recordings LP, “Primetime Entertainment.” You can check out the first single to be released off this record here, “Get on the Roof.”

I’ve seen The Bronx before, so I sort of knew to expect a fast-paced, in your face, screaming rock show.  That is exactly what we got, and then some. When you’re at a Bronx show, you can expect not only the sweat to be flying, but a few elbows as well. The music is going to be loud and filled with distortion, with one goal in mind. To evoke utter chaos. The man who fronts this band and whose lungs never seem to weaken is Matt Caughthran. Matt is always encouraging his audience to give more, to become a part of the show itself. At one point, Matt jumped into the crowd and personally formed a maniacal circle pit, which he then led, all without missing a beat. The rest of this L.A. punk band is guitarists Joby J. Ford and Ken Horne, bass guitarist Brad Magers, and drummer Joey Castillo. These guys are tight. Although heir set was just 8 songs, it consisted of many huge crowd favorites. It takes a confident man to let a band like The Bronx open for you. After 20 years in the business and boasting a huge international following, one might be concerned that this band could steal the show, but Frank has never been afraid to put outstanding openers on his bill. In this case, The Bronx were far above outstanding and were honestly a perfect choice.

Frank Turner has just released his new album FTHC via Xtra Mile Recordings, and it is a return to his roots. The FTHC stand for Frank Turner, Hard Core. Why this title? Check out this video and let Frank tell you himself: FTHC. Just A little more information about this LP. It was mastered at Abby Road by master engineer Frank Arkwright. You may not know the name, but you certainly know at least some of the artists he’s worked with. Arcade Fire, The Smiths, New Order, Joy Division,  Oasis, Morrissey, Buffy Clyro and of course Frank Turner to name a few.  The 24 song set began with “Four Simple Words” and it’s obvious from the start that Frank and The Sleeping Souls are in fine form. Frank makes it clear to us that there are two rules that must be adhered to at a Frank Turner show.  Number one. Don’t be a dick and number two, if you know the words to a song, you must sing it and look out for each other. I guess, technically, that’s three rules. The 2nd song is from the new LP, “The Gathering” is basically a manual of how to behave at a FT&SS show. “This is our mantra, we gather together. We look out for each other, ’cause we’ve got strength in our numbers”. The third song is also from the new LP. “Haven’t Been Doing So Well”. This song address the stress and anxiety people have been going through over the past two years or so. Throughout the set, we get to hear several new songs, mixed in of course with our favorites from the past. Also mixed in are the inspiring moments where Frank would just talk to us like we were family. Always stressing togetherness and celebration. By the time we get to a fan favorite, “Way I Tend to Be” Frank has worked up a sweat for the ages. Not only Frank, but the entire band just gives and gives.  Whether they play the Reading Festival or The Slowdown, the quintet give all they have. The final song of the evening was “I Still Believe”. This is a must sing out loud song. It’s the song that defines the Frank Turner Army and it’s followers. Led by the guy wearing a black tie and plain white shirt who demands our participation. “Who’d have thought, that after all, something as simple as rock and roll, would save us all.” Be sure to check out the new LP “FTHC”, and please add a Frank Turner show to your bucket list.  Even if you’ve seen him already, there is nothing wrong with a bucket of lists over flowing with Frank Turner and the Sleeping Souls.

SET LIST
FOUR SIMPLE WORDS – THE GATERING – HAVEN’T BEEN DOING SO WELL – PHOTOSYNTHESIS – PLAIN SAILING WEATHER  – IF EVER I STRAY – PUNCHES – 1933 – LOVE 40 DOWN – THE RESURECTIONIST – I AM DISSAPEARED  – THE NEXT STORM – MIRANDA – DAN’S SONG – LOVE, IRE & SONG – BE MORE KIND – THE WAY I TEND TO BE – NON SERVIUM – POLAROID PICTURE – GET BETTER – THE BALLAD – RECOVERY – TRY THIS AT HOME – STILL BELIEVE

To The Slowdown. What a wonderful production and atmosphere. Your entire organization and staff were exceptional in their duties. Everyone was welcoming and courteous. Exactly what you’d expect at a Frank Turner show.

LEGENDARY MISFITS GUITARIST DOYLE with front guy Alex Story, bassist Brandon Strate and Brandon Pertzborn on drums; and the Phoenix-based industrial/metal band Element a440 as tour support act; made their stop of their 2017 East […]

The Bourbon Theater and One Percent Productions Presents WOLF ALICE. Your Cure for the Monday Blues

REVIEW and PHOTOS BY DEAN BIRKHEIMER | Go Venue Magazine “In the calm, deep waters of the mind, the wolf waits.” – F.T. McKinstry On April 11th One Percent Productions and The Bourbon Theater brought […]