Oh what a night! Four bands rocked the night away. The Interrupters opened the night up with Aimee Allen, known as Aimee Interrupter singing her guts out. The band formed in 2011 in Los Angeles. I had never seen this group live and was so excited to do so. Whoever said ska was dead?! It sure as hell isn’t! My favorite song sung was “She’s Kerosene” from the album Fight the Good Fight. It is a must-listen, you will not be disappointed! 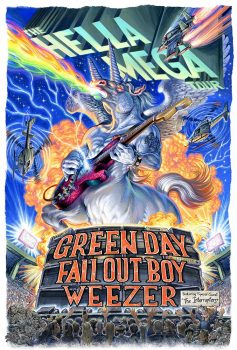 Next on the roster was Weezer. I have seen them a few times now, and I have to say this night was their best. I danced alone at my seat and sang my heart out! Rivers Cuomo rocked a sweet trucker mullet and mustache. They recently had two new albums out this year called Van Weezer and Ok Human, they must have been busy during lockdown. A couple of years ago they also released a cover album featuring the song “Africa” which is my favorite version.

So I have never seen Fall Out Boy until now, and I was completely impressed. Their bass was so loud I thought it might stop my heart, but I made it through alive. Even if you don’t listen to them, I assure you that you have heard a few of their biggest hits on the radio like “Sugar, We’re Goin Down”, “Dance, Dance” or “Centuries.” I have never been a fan until this show, but whenever I pour shots I sing “line em up, up, up” instead of the real lyrics “light ‘em up, up, up.” It was unbelievable, when they sang this song “My Songs Know What You Did in the Dark” they had flames shoot up from the front of the stage and on the outer edge. Pete Wentz also had flames shoot out from his guitar. I was blown away!

Since 1994 when Green Day arrived on the scene, I have been a big fan. I proudly call them my favorite band and have the picture of Kerplunk girl tattooed on my left shoulder. One of my favorites by them is “Jesus of Suburbia” which lasts about nine minutes. You definitely get your money’s worth from that one if you can find it on the jukebox at the bar. (That probably dates me, lol!). Nothing makes me love the 90s more than Green Day. If you enjoy them as much as I do, make sure to check out their pre-dookie albums Kerplunk and 1,039/Smoothed Out Slappy Hours. I remember back in high school, guys in my cooking class would make fun of me for loving them and calling them a one hit wonder. Who is the joke on now! By the time they played the stage, the stadium was full, and it was the most amazing feeling. Luckily, in San Francisco, everyone must have a negative COVID test or be vaccinated. I double masked it to be safe, but it felt almost normal being in the crowd with live music over the speakers. It gave me chills. This tour should not be missed!!

Outside Lands is back again and returning to its homeland, San Francisco. Weeks after announcing its headliner, Paul Simon, the lineup was released featuring some of music’s chart topping musicians. The bill includes none other than, Childish Gambino, blink-182, […]

Monakr, a pop band based out of Chicago, is a band with such amazing charisma and talent. I feel like they are a band that will be headlining very very soon. They love what they do […]

BY KRIS COMER | Go Venue Magazine The band Basement opened the co-headliner Weezer/Pixies show. It was a good introduction of 90’s grunge alternative rock to get the crowd pumped up. They formed in 2009 […]