Decibel Magazine is currently streaming “‘Til Death And Beyond” from Texas death thrash legion Steel Bearing Hand. The track comes off the band’s brutalizing Slay In Hell full-length, set for release April 2nd! 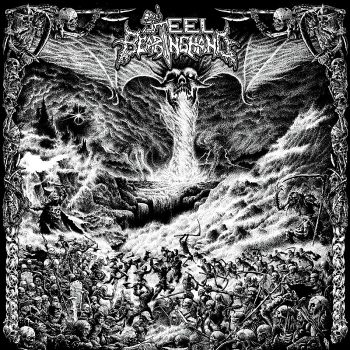 Notes the band of the hellish hymn, “‘‘Til Death And Beyond’ is an anthem dedicated to a fanatical sect of zealots whose faith has been desecrated by an onslaught of sacrilegious interlopers. The maddening and intolerable blasphemy has disrupted the sanctity of their holy places and relics, requiring a re-consecration and an apocalyptic reckoning with the heretical transgressors.”

Writes Decibel of the track, “Steel Bearing Hand‘s death-laden razor blade cuts through all pretenders with irresistible riffing power! The band released its debut self-titled album back in 2015 and is back to slay in hell on its latest offering. It’s with fist-pumping joy that Decibel comes to you with a new track, ‘‘Til Death And Beyond.’ The song has everything you’d want in a thrash masterwork: catchy riffs, a mid-tempo mosh bridge, dive bombs, the works! Through their combination of Deceased, Sodom, and a touch of street punk, the band has crafted the true soundtrack to your next toxic waltz.”

Stream Steel Bearing Hand‘s “‘Til Death And Beyond,” exclusively via Decibel Magazine, at THIS LOCATION.

Engineered and mixed by Irving Lopez (Morbosidad) at Anomalous Mind Engineering and mastered by Jack Control (Cianide, Darkthrone, World Burns To Death, Totalitär) at Enormous Door Mastering, Slay In Hell comes adorned in the diabolic cover illustration of VRUGARTHDOOM and vomits forth six sinister psalms that pay their respects to the masters – namely Celtic Frost, Slayer, and Autopsy – while maintaining a singular unholy vibe.

Slay In Hell will be released on CD and vinyl via Carbonized Records and cassette through Carbonized and Cimmerian Strength Productions. For preorders, visit the Carbonized Records store HERE or Bandcamp HERE where “Command Of The Infernal Exarch” can be streamed.

In the midst of the blistering Texan summer of 2009, Steel Bearing Hand arose from an insatiable thirst for vengeance against all interlopers, blasphemers, and desecrators of Metal. For several years, they waged war in the trenches of house venues, warehouse spaces, and dive bars across America, honing their craft. Finally, in 2015, they released their self-titled debut album, followed by a few tours. Parting ways with their co-founding drummer in 2016, 2017 was spent whetting the blade anew. With their noses to the grindstone, they produced a more refined sound, entering the studio in the summer of 2019 to capture this ultimate incarnation of the band’s character and personality with the fittingly titled Slay In Hell full-length.

Napalm Death and Decibel Magazine Team Up For Vinyl Re-Issues of ‘Time Waits For No Slave’, ‘Smear Campaign’, ‘Utilitarian’, and ‘Apex Predator’

UK Grindcore pioneers NAPALM DEATH have just launched the pre-orders for their limited edition vinyl re-issues of Time Waits For No Slave, Smear Campaign, Utilitarian, and Apex Predator. There will only be 1000 copies available of each title in exclusive custom […]

Obstacles and persecution, these are just a few of the things Cairo / Vancouver post hardcore band MASSIVE SCAR ERA have become accustom to since first forming in Alexandria, Egypt in 2005 where they were […]