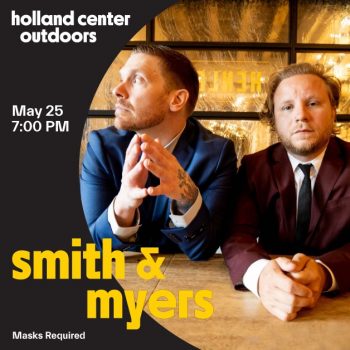 2020 was a rough year for all of us. We couldn’t do any normal activities outside our house like going to see a movie, eating inside a restaurant, and seeing a live musical performance. It took a toll on us. But, all things come to those who wait and that’s what happened on Tuesday, May 25, 2021, when Brent Smith and Zach Myers of Shinedown came to Omaha, NE for the first time since 2010 (on the exact date, nonetheless) to play a sold out show. It was a beautiful outdoors show outside the Holland Center Outdoors in downtown Omaha and what a great night for live music it was.

J.R. Moore and Zack Mack, who play in Zach Myers’ other band, Allen, Mack, Myers, Moore, opened up the show. This acoustic duo was fun to watch. The harmonies. The slide guitar. The harmonica playing! These guys had such a camaraderie. Moore was recounting about the Ranch Bowl, a half music venue/half bowling alley that grew prominent in the 1990s. They even did a cover of the Eagles’ “Heartache Tonight”. If you like acoustic-based country rock, check out Allen, Mack, Myers, Moore’s music.

Brent Smith and Zach Myers are one of the best singer/guitarist duos of all time. They’re up there with Jagger/Richards, Plant/Page, Tyler/Perry, Roth/Van Halen, amongst others. I honestly didn’t know what to expect from a Smith & Myers, as I have only seen those two with Shinedown only once. It was one of the most laid back atmospheric concerts I’ve ever been to. It felt like a Shinedown improv show, expect it was only those two, as a comedy duo, and they were cracking jokes and no setlist at all. But, the music remained the strongest part in the whole show. Smith was on cloud nine with his vocals, one of the best lead singers out there right now. Myers was a perfect balance for Smith, always playing the guitar with a passion. They played originals, Shinedown covers, and hits from every decade, ranging from “Night Moves” by Bob Seger & the Silver Bullet Band to “Waterfalls” by TLC. I couldn’t have asked for a better show to kick-off the 2021 concert season and for concerts to officially to come back. Thank you to the Omaha Performing Arts for making this happen.

Nelly Brings the Party to Omaha

May 15, 2018 marked the return of A Perfect Circle to Omaha, having played here the last time on May 30, 2000, opening up for Nine Inch Nails at the Omaha Civic Auditorium. Baxter Arena […]