The daily band lineups have been announced for the fourth annual Northern Invasion, Saturday, May 12 and Sunday, May 13 at Somerset Amphitheater in Somerset, WI, and tickets are on sale now at www.NorthernInvasion.com. 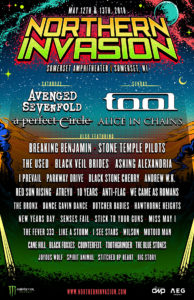 Northern Invasion 2018 will be bigger and better than ever with over 12 hours of music per day from the biggest and best rock bands on three stages—headlined by Tool and Avenged Sevenfold—as well as a top tier camping experience. The Northern Invasion Good Eats area includes food offerings from top regional and national restaurants and vendors.

The daily band lineup (subject to change) for Northern Invasion is as follows:

Northern Invasion General Admission and VIP tickets (including layaway options), as well as Hotel Packages and All-Inclusive Camping options and Tent or RV Camping add-ons, are on sale now at http://northerninvasion.com/tickets.html. Fans are encouraged to buy early and save. Each ticket price level has a limited number of tickets available, so attendees can save more by buying earlier. Ticket prices will automatically move to the next price level once a price allotment sells out. The layaway purchase option—available through February 15—also allows fans to split the ticket cost into three monthly payments.

Current ticket pricing levels are as follows while supplies last:

The Northern Invasion campgrounds will be open from Friday, May 11 through Monday, May 14. Festival doors open at 11:00 AM on Saturday and Sunday.

Northern Invasion is produced by AEG Presents and Danny Wimmer Presents and is part of the World’s Loudest Month concert series, which features the biggest names in rock music performing in six U.S. events in distinct atmospheres during five consecutive weekends in April and May of 2018.

Northern Invasion is brought to you in part by Monster Energy.

Somerset Amphitheater has been a favorite Midwest music venue since the late ’80s. Located on the Apple River and less than 40 minutes from the Twin Cities, for years it has served as a summer hub for music and camping for those from Minnesota, Wisconsin and beyond.

Festival producer Danny Wimmer Presents has released the following update about their 2020 music festivals: There are no pre-existing guidelines for what festivals should be doing during this unprecedented time. Like the rest of the music […]

For the first time, two-day passes are available for Epicenter, May 1, 2 and 3 at Rock City Campgrounds at Charlotte Motor Speedway in Concord, North Carolina, just outside Charlotte. Fans can pick between Friday & Saturday, Saturday & Sunday or Friday & Sunday. As previously […]