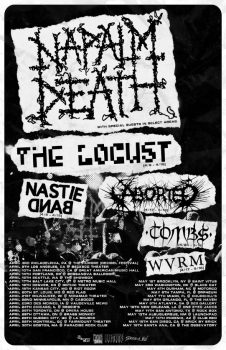 Napalm Death recently announced the release of a new 7″ digital EP, Logic Ravaged By Brute Force, which is set for release on February 7th. The double-a-side EP includes the new title track and a cover of Sonic Youth’s “White Kross”. The release also acts as a teaser for the band’s forthcoming studio album, expected for release late 2020. Pre-order the EP digitally HERE.

Aborted will be touring in support of their 2018 release, TerrorVision, which features some of the sickest riffs and most insane blasts in Aborted’s history. Get TerrorVision, produced by Kristian ‘Khole’ Kohlmannslehner, HERE. Stay tuned for more details about new music.

In preparation of their upcoming special edition 2CD, 2LP and digital rarities and covers compilation, “Coded Smears And More Uncommon Slurs”, out on March 30 via Century Media Records, UK’s grindcore pioneers NAPALM DEATH have revealed a […]