The Bourbon Theatre in Lincoln, Nebraska was the place to be on Saturday, October 16, as Mammoth WVH and Plush made a stop in town to play a big rock show. The crowd was packed for these new bands, as the Lincoln audience are very supportive in their rock n’ roll! 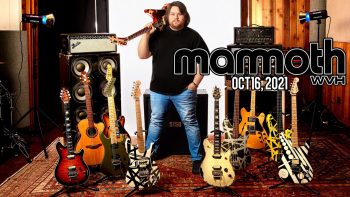 Plush from New York was the direct support for the night. I knew very little of this band, other them being an all-female rock band and listening to their lead single, “Athena” off their upcoming self-titled album. And, wow, I was completely blown away by their performance. It was something fresh, yet so classic. They brought such a youthful energy to the night. Every member performed their instrument amazingly. They even threw down a ripping cover of Heart’s “Barracuda”. So cool to hear that they’re going on tour with Evanescence and Halestorm next month. I hope they come back to Nebraska soon. I will be watching their musical career with great interest.

When I heard Wolfgang Van Halen was coming out with new music, I was excited. I actually got to see him live when he was touring with his father in 2008 in Omaha. It was so cool seeing a kid playing with such legendary musicians. A talented musician in his own right, seeing him live, again, was quite incredible. Coming off his father’s passing last year, putting out an album and touring was one of the bravest moves a musician can do. But, everyone was fulling supporting him while doing so. And this Lincoln crowd came out to support! Obviously, there are those comparisons to his dad’s guitar playing, but Wolfgang Van Halen is a well-accomplished musician in his own right, bringing his own style of playing. His band was tight, rhythmically. And those songs played well live. I’m so glad Wolfie is out there playing live music. I have a good feeling his dad would be proud.

Everybody has a name they are born with. Having one of the most recognizable names in entertainment, Wolfgang Van Halen has been preparing to release music from his solo band Mammoth WVH for some time. That plan […]

ALBUM REVIEW and INTERVIEW: Moving Metal Mountains All Girls Rock Band PLUSH Are Anything But Soft

By Charlotte Alexander | Go Venue Magazine You can’t open Pandora’s Box without expecting a little hellfire to be unleashed and Moriah Formica, lead singer, songwriter and guitarist of PLUSH, didn’t just pry it open, she owns […]