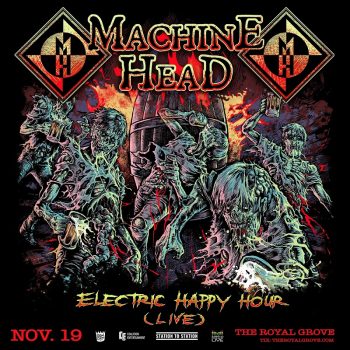 Saturday, November 19 marked the return of Bay Area metal band, Machine Head, to Nebraska. This time they played at Lincoln’s Royal Grove, a legendary music venue in the heartland that has been around since 1933. It was a Saturday night metal rager that was one for the ages.

For the past seven years, Machine Head have been doing “Evening with Machine Head” shows, where it is just them playing for around two and a half hours. This time around, this is a no-frills, intimate, anything-goes tour based on the livestream performances Robb Flynn and Jared MacEachern do on Facebook, where they are playing smaller venues in these mid-major towns like Lincoln, Nebraska. Robb Flynn and crew know how to put on an all-killer, no-filler show. The musicianship was incredible, and the dueling guitars between Flynn and Wacław Kiełtyka were dynamite. I was so surprised to hear bassist Jared MacEachern bringing more unclean vocals to the band, making the music even heavier. They kicked off their set with “Imperium” and then the crowd went insane. The mosh pit opened, and it became an old-school metal show. They even performed two ripping covers of Slayer’s “Seasons in the Abyss” and Sepultura’s “Roots Bloody Roots”. It was so awesome to see Machine Head play in such a smaller-scale venue, sounding better than ever, with a crowd going berserk to every song they played. Be sure to check out their latest release, which came out in August, Of Kingdom and Crown. I do hope they return to Omaha one day, but, nevertheless, their return to Nebraska, in general, was a welcomed one.

BY DEAN BIRKHEIMER, Go Venue Magazine “Time heals nothing, it merely rearranges our memory” – Gary Numan On September 27th the Slowdown served up some nostalgia, with a heavy-duty side dish of Shoegazing and electronic […]

Brantley Gilbert – One Hell of an Amen at Pinnacle Bank Arena

BY JESS BECK | Go Venue Magazine Shows at Pinnacle Bank Arena in Lincoln, Nebraska are always a treat. Hell, shows right now ANYWHERE are a treat, but it’s always nice to be welcomed into […]

Rock n roll legends KISS have announced today that fellow rock icon David Lee Roth has been added as a special guest to the last legs of the END OF THE ROAD TOUR. David Lee Roth […]