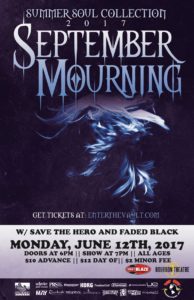 On Monday, June 12, 2017, as a headliner of the evening – September Mourning; a living breathing version of a comic book in music form; performed at the Bourbon Theatre in Lincoln, Nebraska in the front of more than 550 fans.  The human-reaper hybrid September – portrayed on stage by Emily Lazar – as she navigated the world of the living and the world of the dead, continued supporting of their latest EP album – Volume II, along with “reapers”, came out in dark metal gear and cloaks – Rich Juzwick as Riven and Kyle Ort as Wraith on guitars and Josh Fresia as Stitch on drums.  Their stage performance was a quite different than what I thought.  A good way to surprise me, wasn’t it?  Their show was into mix of rock ‘n’ roll music and comic book storytelling.  Classic!

Setlist:
Eye of the Storm | Skin and Bones | Stand by Me | Before the Fall | The Collection | Angels to Dust | ‘Til You See Heaven | Superhuman | 20 Below | Children of Fate

JESS BECK | Go Venue Magazine Fun fact about Zac Brown – you know that song “Colder Weather” that he plays? He wrote that at the Shoemakers Truck Stop off of NW 56th and West ‘O’ […]

REVIEW BY DAVID TAYLOR AND PHOTOS BY ROBERT A CHADWICK | Go Venue Magazine On Tuesday, December 3, the city of Lincoln, Nebraska were treated to some west coast rock n’ roll from LA rockers, […]