I was told before this show that the last night of a tour is a big deal, so having never seen any of these acts live before, I was hoping for a good show.

That person was absolutely right.

I will always remember August 10th, 2019 in Lincoln, Nebraska.

Each one of these bands could have easily headlined a tour in their own right, and right from the get-go it was a solid throat punch to the ear-holes that would echo cheers of encores after the final act was done.

Kickstarting the lineup was Stitched Up Heart, a female fronted powerhouse that combines elements of both electronica, metal, and complete bad-assery. Vocalist Alecia Demner certainly knew how to work the crowd, motioning frequently for waves and claps that were met with enthusiastic responses from the concert goers. They played a mixture of tracks from albums Never Alone and Darkness, both of which I would highly suggest checking out, and not just because I’m a sucker for a strong female lead. Before the last song, Alecia did express gratitude for their fans, as well as thankfulness to be done with the tour so that she didn’t have to watch bandmates James Decker, Merritt Goodwin, and Randy Mathias change their pants four times per day (which, we were informed, was due to massive amounts of ball sweat). Can’t say I blame her one bit. 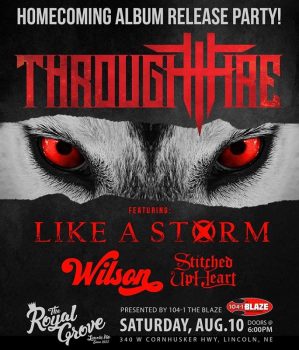 Second up was Wilson, and they really stole the show for me. Their sound is like dropping acid for the eardrums. Imagine if Kid Rock, Limp Bizkit and Steel Panther all got together and had a baby in a back alley and fed it pure rock n’ roll – this is Wilson. Based out of East Lansing, MI, these guys came out to their song “Dumptruck,” off of their newly released album “Tasty Nasty.” The video, by the way, is equally as entertaining to watch as it was to see this live.  Vocalist Chad Nicefield came to win the day with an incredible stage presence, routinely engaging the audience with wild eyes and a plethora of middle fingers. They ended the self-described “nonsense” with Nicefield wearing a marching band drum illuminated with green lights frantically beating it around the stage to rampant cheers from the crowd. Truly an incredible act to see live – 10/10 will not be the last time I catch these guys at a show!

Up next was Like A Storm, a New Zealand based hard rock band. The stage set up was incredible. Eight televisions provided background images that flashed through the crowd, while two large didgeridoo’s disguised in massive skull sets dawned center state. Cheers erupted as the band took the stage, and they kicked off with their hit single “Love The Way You Hate Me” from their album “Awaken The Fire.” There were plenty of theatrics to the act. Members of Wilson adorned the state for one song, and Nicefield enjoyed crowd surfing during the track “Gangsters Paradise.” The band was also joined for one song by vocalist Grant Joshua Kendrick from Through Fire. The theatrics might have been necessary as the band visibly looked exhausted from being on the road. While still putting on a good show, it didn’t match the intensity level of Wilson, but they saved it when lead singer Chris Brooks jumped into the crowd after releasing giant white balloons. They ended their set with “Wish You Hell” – and I wish like hell it’s not the last time I get to catch these guys. Tour fatigue aside, it was still one hell of a ride.

Headlining the evening was Through Fire, a hard rock band based right in the heartland of Omaha, NE. They came out and instantly wanted to show gratitude for the tour and the show, including local radio station 104.1 The Blaze for being so instrumental in their success with radio play. Their song “Stronger,” the band’s debut single, rose to 29 on the Mainstream Rock Chart earlier this year and has since launched the band into intense success. They kicked off the show with “All Animal” which sent shockwaves through the audience with its hard hitting beats and gravel-toned vocals. Fists were flying and heads were bangin’ in response creating a very animalistic feel to the end of the show. Slowing things down a bit, they played “Superhero,” a track that vocalist Kendrick said he wrote about his wife and daughter while he was on the road. And in a brief moment, guitar player Justin McCain leaned off stage to give his wife a kiss as she was in the front row – a romantic gesture in a show that seemed less like romance and more like a mosh pit. They ended the set with “Stronger” to thunderous applause from the crowd, and not one foot was left on the floor during the track.

All said, it was an incredible, gut-punch show that featured a range of artists from around the globe. The Royal Grove in Lincoln, NE was the host, and despite having the main bar shut down and minimal air conditioning for the patrons as it was also incredibly muggy and hot outside, it proved to be a staple for venues in Nebraska for touring bands making their way though, or in this case, ending, a tour run.

BY JOE DeSANTI | Go Venue Magazine “The most interesting people are the unusual.  No one writes about or discusses the average, the ordinary, or the common; they write about and discuss the weird, the […]

WORDS BY DAVID TAYLOR and PHOTOS BY ROBERT A. CHADWICK | Go Venue Magazine The day after New Year’s Day. Who would have thought that would be a good night to have a show at […]