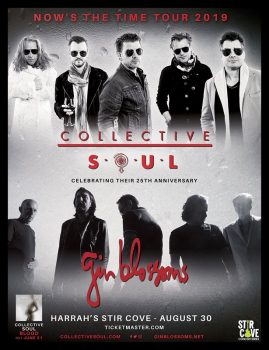 On Friday night, August 30th, two of my favorite rock bands from the 1990’s invaded the Stir Cove in Council Bluffs, Iowa, and I couldn’t have asked for more. Concertgoers packed the cove, and it was literally standing room only. First to the stage was Gin Blossoms.  Their 13-song set included 5 songs from their latest album, “Mixed Reality”, an awesome Tom Petty cover, and all of their hits from the 1992 album, “New Miserable Experience.”  The band saved their biggest hit for last, as “Hey Jealousy” sent the crowd into frenzy and garnered a huge ovation. It was a great way to start the night, and more than a couple times, I caught myself singing along to some of my favorite Gin Blossoms hits from my high school days.

Next to the stage was the Billboard Music Award-winning, Collective Soul. Based out of Georgia, the band has enjoyed over 25 years of success. Donned in a top hat, and thick-rimmed black sunglasses, lead singer, Ed Roland led the band to the stage, and the crowd went wild. Opening their set with a song from their latest album, “Blood”, their 17-song set included some of their biggest hits, and other gems from some of their older albums. Standout performances of the night for me were an extended version of their 1994 hit song, “Shine”, “December”, “The World I Know”, and their closing song, “Run”, from the 1999 album, “Dosage.” Seeing Collective Soul in concert brought back great memories of my high school years, and it’s easy to see why they’ve been so successful. During their entire set, the band had great energy, and kept the crown on their feet. On one hand, I had a feeling of nostalgia, because some of their biggest hits were released during my formative years, but on the other, I realized that after 25 years of producing Alternative Rock hits, Collective Soul still ranks right at the top for the current generation. This was an awesome show!

Catch Collective Soul when they play your area, see their tour schedule as follows:

Legends will collide late this summer when Deep Purple and Judas Priest embark on a co-headlining North American tour.  Produced by Live Nation, the outing will kick off August 21 in Cincinnati, OH and visit 25 cities across the […]