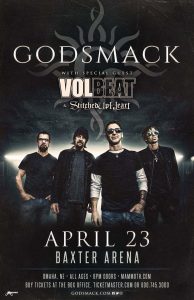 When I heard Godsmack was coming back to Omaha, I was very excited to finally see them. They had not been back to the area since 2010, so to finally see them was a miracle. And have them to bring out Volbeat out was awesome, as well. Baxter Arena in Omaha, NE was the place to be at on Tuesday, April 23, 2019 to have a rockin’ time!

Stitched Up Heart kicked off the show. They have been to Omaha a handful of times, but it was my first time seeing them live. Lead singer Mixi had an energetic stage presence to her. So much headbanging, hair flying everywhere onstage amongst the members of the bands. It’s always nice to have a younger band out on tour with a couple of veterans. They finished their set with “Lost”, the lead single off their forthcoming album, Darkness.

Denmark’s very own Volbeat was the direct support of the night. Originally scheduled to play 2016’s River Riot, but cancelled due to thunderstorms, this marked their return since 2012, when they played at Sokol Auditorium. I love their love for Elvis and Johnny Cash. And translating that to their live show is so much fun, everyone singing along to their songs. They also played their some cover of Dusty Springfield’s “I Only Want to Be With You”, which I loved so much. Michael Poulsen’s has so much swagger to his voice, he is heavy metal Elvis. They even teased us by playing an new song called “The Everlasting” off their forthcoming album. Great performance by the guys in Volbeat. Excited to see them, again, when they come back to Nebraska in August with Slipknot to play Lincoln.

Finally, it was Godsmack’s turn to hit the stage. Like I said up top, it has been way too long for them to come back to the area, the last time being was Rockfest 2010 in Council Bluffs. Two albums later, the time has come to finally come back to the area. For a band who has been kicking it for almost 25 years, these guys still got it. Sully Erna is one of the greatest frontmen out there. Loved his enthusiasm onstage. The whole band was tight, always had a groove to them. But, the pyro they brought was intense. I was at the front right of the stage and felt them. They are out on tour for their latest release, When Legends Rise, they played five songs off it, including “Under Your Scars”, a ballad about accepting the scars you have, as well as accepting with the person you are with’s scars. The highlight for me was the dueling drum solo between Erna and Shannon Larkin, “Batalla de los tambores”. For being almost ten years late, Godsmack put on one hell of show. They looked like they weren’t slowing down, so it would be nice for them to come back sooner, rather than later.

Saturday, December 2, 2017 – Sokol Auditorium puts on many shows every year, but this one was one of a kind. Originally scheduled at the much smaller The Waiting Room in Benson, tickets were flying […]

Godsmack is joining forces with Volbeat for a North American 2019 Tour! The tour will kick off in the US with Volbeat as the special guests and Godsmack headlining. Those dates will be followed by co-headling dates with […]