Hot on the heels of the massive second leg of Knotfest Roadshow 2022 tour, Slipknot have announced today that they will be hitting the road for their fall tour, this time with horror-themed metal maestros Ice Nine Kills and metalcore titans, Crown The Empire. Produced by Live Nation, the run will kick off on September 20th in Nashville, TN and hit an additional eight cities before culminating in Irvine, CA on October 7th. Knotfest Presale begins on Tuesday, June 14th for Premium Members and people can sign up to gain access through Thursday, June 16th. General on sale starts at 10am local on Friday, June 17th from Knotfest.com/Roadshow.

2021 marked a banner year for Slipknot. Making a triumphant return to the road, their Knotfest Roadshow 2021 tour sold out amphitheaters across the country, bookended with the record-breaking Knotfest Iowa and the biggest headline show of their career, Knotfest Los Angeles at Banc of California Stadium where they debuted their first new music in two years – the furious ‘The Chapeltown Rag’ taken from the highly anticipated new Slipknot album, expected to release this year. In addition, they topped the bills of multiple, internationally renowned festivals including Riot Fest, Rocklahoma, Inkcarceration, Welcome To Rockville, and more.

Keeping this jaw-dropping momentum going into 2022, Slipknot are set to wrap on their Spring run of Knotfest Roadshow 2022 tour this week. The first two legs of the tour have seen the band play a staggering 40 dates in arenas nationwide. The first leg featured In This Moment and Wage War, the second leg featured Cypress Hill and Ho99o9.

With absolutely no signs of slowing down, Knotfest Roadshow 2022 steamrolls on, razing each city it touches to the ground. Don’t miss the epic Fall run of this undeniable beast of a tour when it hits the road this September. Full routing below: 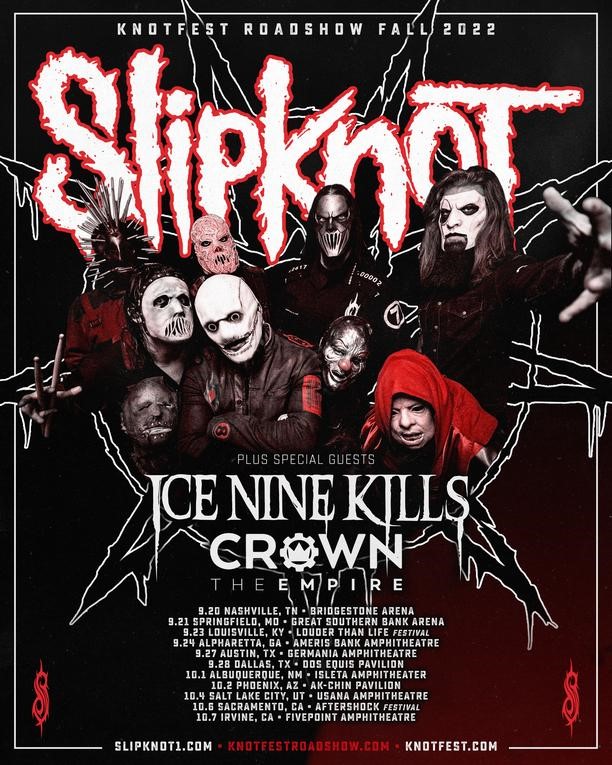 Aftershock–the West Coast’s Biggest Rock Festival–returns to Discovery Park in Sacramento, CA on October 6-9, 2022 bigger than ever, expanding to four full days (after a half 4th day in 2021), adding a 4th music stage and featuring over 90 bands. The […]

BEVERLY HILLS, Calif., July 22, 2021 — Today Live Nation announced it is celebrating the Return to Live concerts this summer by offering fans $20 all-in tickets to nearly 1,000 shows this year. As Live Nation’s outdoor venues across the […]