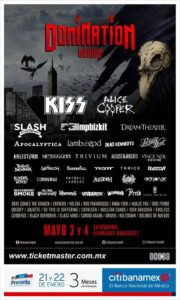 The Domination Festival will take place on 3rd and 4th of May 2019 at the Autódromo Hermanos Rodriguez, a motor sport race track in Mexico City, Mexico will be having two Sleaze Roxx favorites – KISS and Alice Cooper – as headliners. Other Sleaze Roxx friendly artists include Slash featuring Myles Kennedy and The Conspirators, Halestorm, Vince Neil, Blackberry Smoke and many more!!

Alice Cooper‘s Facebook page indicates the following about Domination: “Ol Black Eyes is BACK for Domination MX in Mexico this May. Tickets go on sale Wednesday, Jan 23 at www.domination.com.mx“

Other bands that will be performing at the Domination Festival include Limp Bizkit, Dream Theater, Lamb of God, Dead Kennedys, Meshuggah, Trivium, Ratt, Alien Weaponry and even Finnish instrumentalists Apocalyptica.

The Domination Festival, which replaces the Hell & Heaven.

It’s time. MEGADETH and LAMB OF GOD cannot be stopped and today announced the rescheduled run of the Metal Tour Of The Year. Joining them, as previously planned, will be special guests TRIVIUM and IN FLAMES, […]

Gojira have just announced a tour with support from Knocked Loose and Alien Weaponry, see the full list of tour dates below. Gojira will be celebrating their long-awaited seventh studio album, Fortitude, which dropped April 30 via Roadrunner. The […]