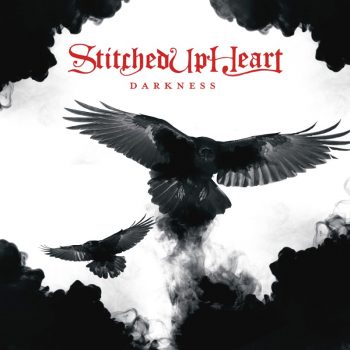 The song’s title track is raw, emotional, and honest. And Mixi herself says it’s her favorite on the album.

“I think that the reason that the album title is that song title is because everything kind of tied into what that lyrical content is throughout the album, kind of going through those dark times and not being afraid anymore,” Mixi says over the phone. “Hitting rock bottom and hitting it again and being like, ‘is this ever gonna stop? Am I always gonna just end up here?’”

She mentions, “I had some very, very close followers of the band- who I consider family- and they were having a really, really rough time, and I was trying to pull them out of this dark area, and it was very challenging. During the time this song was written I wanted to write something to inspire some sort of hope.”

Mixi goes on to say that those fans have made major progress. One of them has even gotten married. She notes, “I think that music has saved me in so many ways, and what’s the point in making the music if you can’t help others?”

This type of mindset is not only obvious in Mixi’s lyrical content, but in everything she does. Stitched Up Heart has a history of giving back to veterans, and Mixi herself is involved in kitten fostering and rescue. She believes that artists- or, really, everyone- has a responsibility to give back.

“Anybody, whether it’s on social media, or actors, or just your average joe that works in the local coffee shop- if you can do anything, or you can press $1 donation to the Heart Association- those little things go a long way. I actually get really depressed if I haven’t been able to give for a while. We get so caught up in being selfish… that’s just human nature, but I feel like the universe gives back more if you’re giving more.”

Stitched Up Heart has a unique way of giving. Prior to the full release of Darkness, each song was dropped individually. This seems to be a new trend among many bands and artists.

“The way that people buy and listen to music has changed so much since our last record… I mean, our last record was in Best Buy. So, the label and us came together with this idea- kind of what a lot of pop artists and rappers do. Keeping momentum. There are really no rock artists doing this right now,” Mixi says.

She notes that with streaming, and despite the loyal fanbase that rock produces, there isn’t a lot of incentive to buy physical albums anymore. That’s partially why Darkness has some secret tracks on the physical copies.

“It gives people something to look forward to each month. I think we’ll continue to do it,” Mixi says. “I really do think that’s gonna be the future of music.”

There is an intimacy to releasing tracks one-by-one. For artists like Mixi, with close relationships to her fans, this is a plus. Maintaining that intimacy can be a challenge for some.

“I wish that artists had a little more control in situations. In our situation, we’re super lucky, because we have a great label. We have great management. They’re very open to us being creative. But the whole industry has a system of how its stuff is going on the radio and what bands are able to do what at what time.”

Partially, unfortunately, why some bands and artists get labelled as sell-outs.

“The great thing about streaming is you can see what a single is to people. You can see what is being played more. So now you’re starting to see this change in what used to be pushed as a single based off of what the labels thought versus what the artist would think. It doesn’t have to be business all the time,” Mixi says, her attention to creativity and people peeking through. Her words and actions make it clear that music, and what it means to others, comes first. Barebones art- the reason why the lyrical content of Darkness is what it is.

“You can’t just do what people what. In the end, you have to write something that you’re proud of, and hope that you can help people or make something that will translate into being authentic and unique in its own way.”

An Interview With John Notto And Justin Smolian Of Dirty Honey

BY JD SNOVER | Go Venue Magazine It’s been 52 years since Aerosmith formed in northeast America, but their music is still covered across the world, including by bands such as California rockers Dirty Honey. The […]

Sin Quirin 2 time Grammy nominated guitarist of Ministry and The Revolting Cocks has a new project in the works and was kind enough to tell us all about it! GVM: Three Headed Snake is […]

A Sit Down with Sawyer Fredericks

BY JESS BECK | Go Venue Magazine 10/16/2019 – the Slowdown, Omaha, Nebraska Sawyer Fredericks is currently on a mini tour of the Midwest, stopping in Omaha, NE on his way through. Having won season […]