The INKCARCERATION Music and Tattoo Festival recently announced its return to the historic Ohio State Reformatory, a.k.a. Shawshank Prison, in Mansfield, OH on July 12, 13 and 14. This year’s massive line-up will be led by none other than colossal rock bands Shinedown, Godsmack and Five Finger Death Punch. Quickly becoming one of the nation’s premier rock festivals, INKCARCERATION will feature over 30 bands on two outdoor stages, 70 tattoo artists, reformatory tours, gourmet food trucks, the best drinks and for the first time, the haunted house attraction, Escape from Blood Prison.

Today, INKCARCERATION has revealed its full tattoo artist line-up. With the concert happening outside, INKCARCERATION will feature 70 local and regional tattoo artists tattooing all weekend inside the reformatory. Appointments are recommended if there is a specific artist you would like to work with. Visit www.inkcarceration.com/tattoo for information on how to book your appointment! 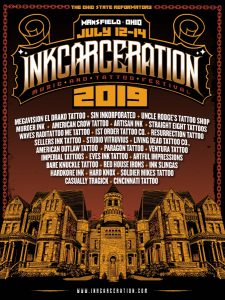 Tattoo competition details and judges will be announced soon.

“I have to say, out of all of the events I’ve worked, this one takes the cake. The atmosphere of music, tattoos and entertainment, along with the prison, makes it my absolutely favorite time of the year. There’s really nothing else quite like it. Last year really broke the mold of expectations as far as events go, so I’m beyond excited to see what this year brings.” – Samantha Little

“I’m very excited to work this upcoming show in July. Being a local event, I’ll not only be able to meet new people, but I’ll have the opportunity to work along side amazing artists I know from the surrounding areas. I attended INKCARCERATION last year as a guest and I saw a lot of good music talent, artists, and vendors. There was inspiration everywhere which created an all-around cool and fun atmosphere. Can’t wait to kick off this summer with a blast at INKCARCERATION!” – Cheyanne Cooper, Mainstreet Studios

“This will be Godsmack‘s first time back at the Ohio State Reformatory since we shot the “Awake” video in 2000, so we can’t wait to get out and rock with you! We’re coming at you harder in 2019 than ever before so get ready!” – Godsmack

“We’re really excited to play INKCARCERATION. It’s our first time playing at a prison, so that’s cool. Also, I found out it’s the prison where they shot Shawshank Redemption so that makes it even cooler!” – John Nolan, Taking Back Sunday

“We’re so stoked to be a part of this year’s INKCARCERATION in Mansfield, OH. There’s never a show in Ohio that disappoints, and as of 2018, Columbus now holds the record for second biggest headlining show we’ve ever played. We can’t wait to bring some new material to fans that have had our back for a long time. See ya soon!” – Motionless In White

“The Starset Society is proud to include Starset at this festival for a demonstration in their home state of Ohio. The promotion of our Mission continues. Ignorance : Slavery : Knowledge : Freedom.” – Starset

“We were raised in Akron, OH. The people of Ohio clearly have a passion for live music and we’re humbled to be a product of this state. Always feel honored to be a part of something that’s close to home. See you all soon.” – Red Sun Rising

“What a great idea! Buckcherry is fired up to be a part of such a cool pairing of prison, tattoos and Rock n’ Roll. It’s gonna be a barn burner.” – Josh Todd, Buckcherry

“My band and I are beyond psyched to party harder than ever at INKCARCERATION! We shall summon the party gods and use their power to celebrate together and make memories to last forever!” – Andrew W.K.

Field and Camping tickets are on sale NOW via https://inkcarceration.frontgatetickets.com/!

The third annual INKCARCERATION Music and Tattoo Festival has revealed the daily lineups for its three-day event, scheduled for July 10, 11 and 12 at the famous Ohio State Reformatory, a.k.a. Shawshank prison, in Mansfield, […]

Rise Against, A Day To Remember, Bush, Black Label Society, Clutch and More to Perform at Inaugural INKCARCERATION Music and Tattoo Festival