BAND TO TOUR WITH MOTIONLESS IN WHITE, VIMIC, AND LITTLE MISS NASTY 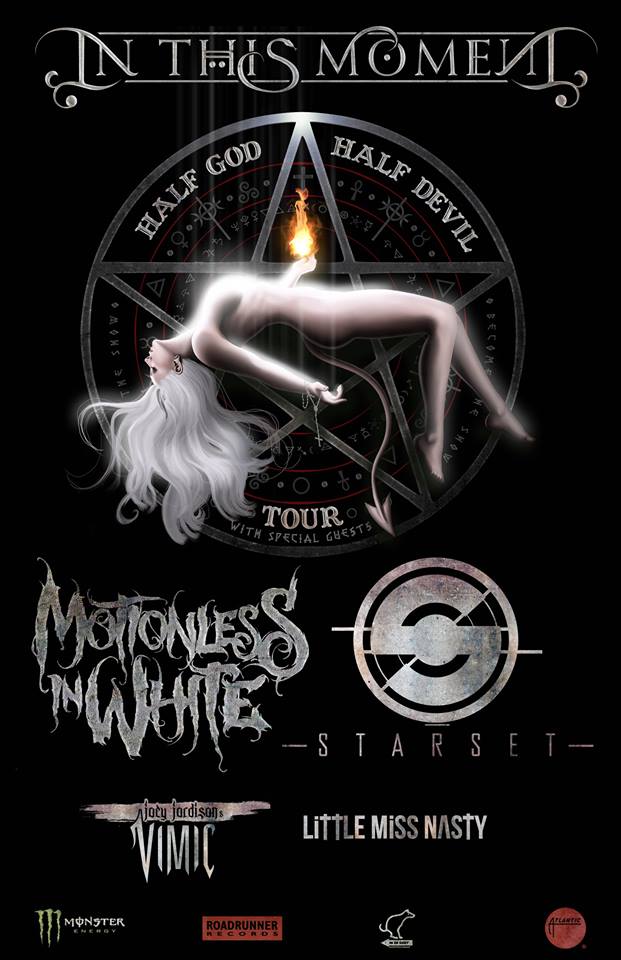 In This Moment are currently criss-crossing North American on a mostly sold-out tour with Motionless In White and Avatar, bringing their one-of-kind, burlesque-like show and visually captivating theatrics to thrilled fans and holding their rapt attention from start to finish.

The band has revealed its summer tour plans, confirming that it will continue to tour with Motionless in White, along with VIMIC and Little Miss Nasty, in June, through July and into August. Starset will appear on a handful of dates. Additionally, In This Moment will support Avenged Sevenfold on June 19 and Papa Roach on June 23.

All confirmed dates are below, with additional dates to be announced shortly. Further exciting In This Moment news will be revealed in due time.

ABOUT IN THIS MOMENT:

In This Moment made a stunning top 10 chart debut with 2015’s acclaimed BLACK WIDOW. Produced by longtime collaborator – and multiple GRAMMY® Award nominee – Kevin Churko (Five Finger Death Punch, Ozzy Osbourne), the band’s fifth full-length release arrived at #8 on the SoundScan/Billboard 200, while also entering Billboard’s “Hard Rock Albums” tally at #3 – both marking In This Moment’s highest chart placement to date.  BLACK WIDOW” features a string of rock radio hits, including “Sick Like Me,” “Big Bad Wolf,” “Sex Metal Barbie,” and “The Fighter.” Official companion videos – all co-directed by In This Moment’s own Maria Brink – are streaming now at the band’s official YouTube channel.

Known worldwide for their dramatic live performances, In This Moment have received rapturous praise in a range of national outlets. “One of the most unique, diverse and theatrical live acts you could witness in heavy music today,” raved Loudwire. “Not only are they a powerhouse sonically but visually they are beyond captivating. With a bigger label backing them for BLACK WIDOW, the production, sound and overall professional level of their concert experience has been elevated.”

IN THIS MOMENT RITUAL ENJOYS HUGE DEBUT ON CHARTS

Halestorm and In This Moment have announced a second leg of their forthcoming, all female-fronted hard rock tour. “After the announcement of our tour with In This Moment, the response was so great that we decided to […]